[I found this interesting interview here in the Aargauer Zeitung.  It corresponds to the opening of Alcina at the Zurich Opera.] 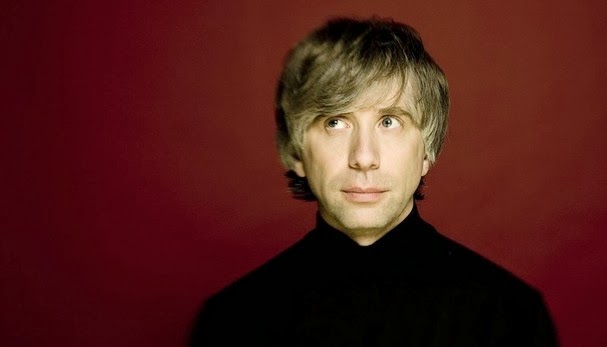 The Milanese Giovanni Antonini became world famous as a flutist and conductor of the Baroque ensemble "Il giardino armonico".  Today he conducts operas in Salzburg and Zurich.  In this interview he talks about divas and his native Italy. by Christian Berzins

Only a few days after the interview at the Opera House Zurich it becomes clear why Giovanni Antonini said three times in the music room in an hour, "There is no right or wrong, it remains a matter of taste." Though convinced that he is doing the "right thing", the Milanese knows that it is not without controversy.

He can live with that because his style of conducting is well received by both opera star Cecilia Bartoli, with whom he works a lot, as well as the Basel Chamber Orchestra, with whom he plays a Beethoven cycle.  And last but not least by most critics.  In the interview he talks enthusiastically about Bartoli, sighingly over his native Italy, and positively about Alexander Pereira's chances in Milan.

Giovanni Antonini, in 2009 you performed Handel's "Alcina" with the German Anja Harteros in Milan, and in ten days with the Italian Cecilia Bartoli in Zurich. What will be different about this for you?

Giovanni Antonini: An opera performance always depends on the artist.  Here in Zurich are both the production as well as the singer quite different. My view of this music, however, remains more or less the same.  Anja Harteros and Cecilia Bartoli are worlds apart.  I've been working a lot lately with Bartoli, in this work one realizes a development, the way to a common language.

Both singers are divas. Is that difficult for the conductor?

To only be a diva is not enough for an opera by Handel. Whether one likes one or the other singer better is one thing.  But Bartoli has studied this musical language for many years, has her own unique way of singing this music.  Thus, this Zurich production is much more interesting for me.  Although the work was beautiful with the Scala orchestra, I met in Zurich an orchestra that is used to playing Baroque operas.  Here the orchestra is playing on gut strings, with baroque bows and baroque brass instruments.  We start on another level!  As with the singers: It's not about good or bad but to understand the language of music.

Who is this singer, this diva?

Cecilia Bartoli embodies a rare combination of skills. Two tones from Bartoli - and you know who sings. It is the mix of technique, originality, uniqueness of her voice - and she has a musical instinct:  If something does not work, then she notices it.  Bartoli is a typical Italian woman, she can formally smell situations.  She manages to sing so that everyone in the audience thinks she'll do it for him alone. She has many admirers, but kindles at the same time discussions about her person.  This is quite normal .

A few evenings after Bartoli, Agneta Eichenholz sings.  Do you change your conducting?

Quite. The conductor and his orchestra have to breathe with the singers . And at a Einspringerin or understudy I need to understand their breathing. But the times are now situations that exist in the theater. It exerts an opera over many weeks, and on opening night you have to re-adjust to the situation. Suddenly something happened : A change of pace , a forgotten word , something falls down ! Since the conductor must be ready. There are singers who are completely detached from the orchestra : "Follow me , I am the diva."  The Bartoli is the opposite: She's a diva who practices, experiments, and discusses a lot with the conductor.

You quite often work with singers.   Do you love them?

I love singers who want to work together to evolve and have a vision of their role.  I do not like simply to accompany a singer.  But I respect every singer because singing is something quite different to master from an instrument like a violin.  A singer is naked on stage.  How badly we sometimes judge the voices and hit the people!  While talking about voices we have to be careful not to destroy the people.

You have not only conducted Handel with Cecilia Bartoli, but Vincenzo Bellini's "Norma", a major work of the 19th Century.  And now you present a Beethoven cycle with the Basel Chamber Orchestra.  Is this a normal step for the baroque specialist Antonini?

Each was an adventure.  There are standards on how to conduct Bellini's music.  But this tradition, I do not know, so we said:  let's see what is really in this score, we let go of everything that Maria Callas had shown us!  My musical roots are in the 18th Century, I drew this Bellini closer to Mozart than to Verdi.  So I went also at the Beethoven symphonies .

I'm not sure if the world of opera should be my center.  My nature corresponds to the more symphonic and my flute playing with chamber orchestra.  There are ideas, projects, but better not to make any greater steps than the leg allows, as we Italians say. The 18th Century remains my world.  I have conducted the Berlin Philharmonic Orchestra and other world-famous orchestras , but when I conduct Il Giardino Armonico, the Basel Chamber Orchestra, the Mozarteum Orchestra Salzburg or a comparable orchestra, I meet a familiar community that is trusts me and is congenial.  Also here in Zurich it seems to me that it's on the musical and human plateau.

You, the Milanese, since 2009 have directed no more operas in Milan or anywhere else in Italy, the "Land of Music," but trade it for headlines in Salzburg.  Is not that strange ?

Italy is now a very strange land (hesitates).  I told you how I want to work - the emphasis is on "work".  That's no longer possible in Italy today.

There are so many great Italian musicians! Do men gather together for anything to happen in Italy? Why is there no Baroque Festival in Florence in the historical halls - where the opera had its origins?

The politics has not yet understood that the cultural offering can make a major contribution to the economic development of a country.  Salzburg is for example a small town, but the international success of the festival is a benefit for the whole of Austria, culturally and economically. In Italy there are many talented, creative people with great ideas, who call festivals to life.  But they are not supported, which makes it impossible for them to plan long term.  Sitting together is not an Italian strength. The sense of the Country or the sense of community can be seen, despite unification in the 19 Century less and less. We let Pompeii disintegrate, we do not care. It has so many other works of art ... Soon one has some less ( sighs) ... Nevertheless, I love this country .

At La Scala there is now the ex - "Zuricher", the Austrian Alexander Pereira. Will this go well?

I think so, he knows the Italians.  Pereira will understand the system.  In Milan a lot is expected from him, but also there is a lot of confidence in him.

Giovanni Antonini was born in 1965 in Milan.  While still a student the flutist founded the specialist ensemble Il Giardino Armonico, with whom he performed all over the world and he leads alone since 1989.  The encounter with Cecilia Bartoli was 2000 when the famous Vivaldi album came out. He has conducted, among others, the Berlin Philharmonic, the Concertgebouw Orchestra and the Tonhalle Orchestra Zurich. His recording of the complete Beethoven symphonies with the Basel Chamber Orchestra is nearing completion. Giovanni Antonini conducts at the Zurich Opera House on 26 January Handel's "Alcina".
[Dr B.  I like very much at the beginning where the question of right and wrong is discussed.  He says it's a matter of taste.  Whether or not something is correct means nothing to me.  All I care about is does it live in the soul of the artist?  In Antonini's case that seems to be true.]