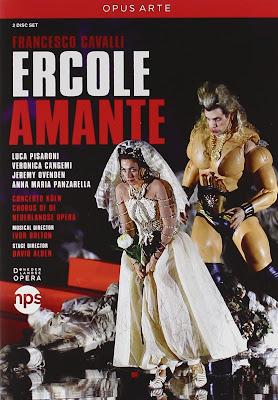 No expense has been expended to explain the plot of Cavalli's Ercole Amante (1662).  Perhaps a dissertation would be required.

Here we go.  In Act II Scene 4 someone explains that:

"Hyllus [son of Ercole, Jeremy Overden] loves Iole and she loves him, but she hates Ercole [Luca Pisaroni] who loves her;  Nicander loves Licoris, and she loves Orestes who loves Olinda; Olinda and Celia love gold and jewels...."

Ercole is married to Deianira, mother of Hyllus, and Iole hates him because he killed her father.  Ercole thinks he should kill Deianira and Hyllus.  Apparently, explained in Act III, Iole's father promised her to Ercole.  Iole then talked him out of it, and Ercole killed him.  Ercole blames everything on her.

There is a lot of hanky-panky in this opera which was supposed to be given at the marriage of Louis XIV to Maria Theresa of Spain.  I'm not sure, but I think there is a confusion of Ercole with Louis.  It's a kind of Iron Man plot where as the king of France he is skinny like, well, like Luca Pisaroni, and then he puts on his muscle suit and turns into the super buff Hercules.  This suit doesn't help him fight crime, it's just for attracting women. 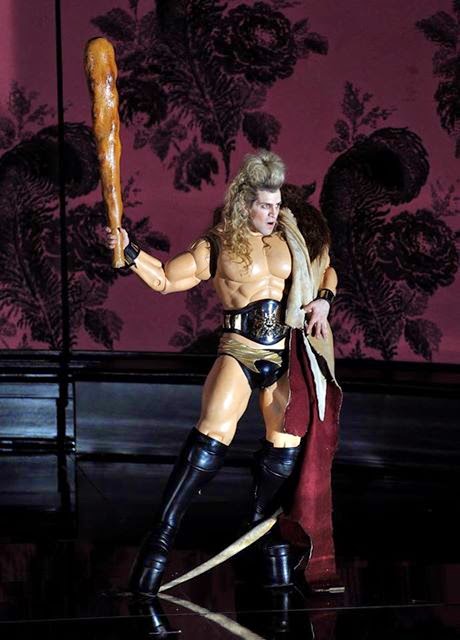 Doesn't seem like a particularly suitable plot for a wedding celebration.  They could not perform the opera at the wedding in 1660 because the construction of the stage machinery was not complete.  I imagine things soaring through the air or flying down from above, things which don't seem to happen in modern productions.

This is all miserably hard to understand.  Much like in the Ring, there are gods littering the stage who take sides with the mortals.  Venus is with Ercole.  Juno [Anna Bonitatibus], naturally sides with Deianira and tells Iole how wonderfully virtuous she is.  Neptune and Juno advise Hyllus.  Oy.  It's exhausting.

The music is mostly Florentine recitative with arias and ballet interspersed.  Because it's meant for Paris, there is quite a lot of ballet.  There are some funny scenes.  The dialog refers to Atlas, so he appears holding up the world, which Ercole takes out of his arms and carries easily around before giving it back to Atlas.  The program notes call this an opera buffa, but we know that it is before the split into seria and buffa.  It can't be a buffa because there was at least one castrato who sang Juno.

In Act IV there are giant fish, boats and water for Neptune to rise out of.  They could have more successfully differentiated the gods from the humans.  But then what to do with Ercole who is some of each?  Luca is adorable in his muscle suit.

In the end Ercole becomes a god who marries Beauty.  In his guise as a god he goes back to resembling Louis XIV, a significantly thinner person who wears a sun crown.
#ad