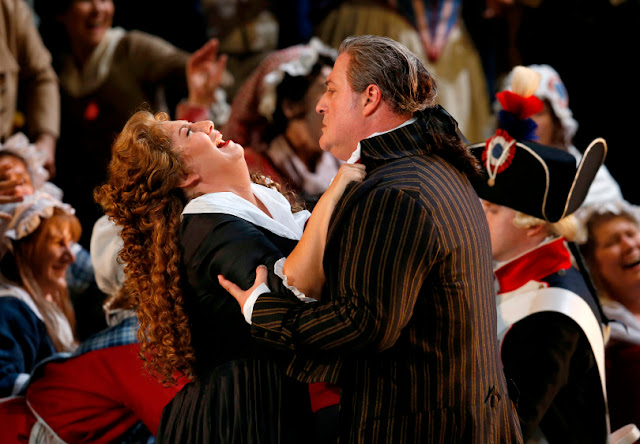 Giordano's Andrea Chénier from the San Francisco Opera was a real treat. The above performers with * next to their names were making their San Francisco Opera debuts.  My favorites in order were George Gagnidze, Anna Pirozzi, J'Nai Bridges and Yonghoon Lee.  Gérard's aria in the prison scene was especially wonderful.  I have seen Gagnidze a few times before.  I'll try to remember him this time.  This is an excellent group of debuts.

I saw this production in the film from the Royal Opera in London.  I thought the final scene made a better effect here.  I like the way the entire production looks.

Most surprising was Anna Pirozzi who began her performance with a relatively small tone and continued to increase in volume until the really quite loud finale.  It was thrilling.  She was new for me.

I have seen Yonghoon Lee before in Il Trovatore from the Met.  I felt he handled Verdi much better than he managed Giordano.  Chénier is a role that best fits a voice like Mario del Monaco while Lee seems to try too hard and creates the impression he is struggling.

This is highly recommended from me.  I enjoyed it very much.

I went to the lecture where we were told that Maddalena actually got away.  Sigh.

Check out Pirozzi's work on youtube, especially her Lady Macbeth and Elisabetta (Roberto Devereux). She's one of the best ever in those two roles.

the opera really should be called Gerard, because that's the only character with a discernible inner life, only one who grows or changes much...but, of course, AC is an historical figure and the rest are (probably?) imagined...
we enjoyed this production, too, immensely, also...I especially liked the guys with the brooms. Also, the gavotte scene. The aristos line up and start dancing, with beautiful warm white light bathing them. the peasants come in, their ejected, Gerard quits, the aristos repeat the same dance steps--this time, lit from the sides, with stark shadows.
the opera actually made us go back an read up on (well, read Wikipedia on...) the French Revolution. does any other opera mention Girondists? or the war in the Vendee?

sorry.. "they are ejected"

My wife and I saw this opera at the Met in March 2014, with Patricia Racette, Marcelo Alvarez and Zeljko Lucic (plus Dwayne Croft in a minor role). It's a masterful work with memorable music; what a shame it's not done more often. We wanted to come to S.F. to see this production, but it was too expensive a trip for just a couple of nights (hotel costs in the Bay Area are INSANE), plus we're saving up for our trip next February to Russia, so...

I think I remember you were coming. Sorry you didn't make it. Our cast was terrific but yours sounds good too.