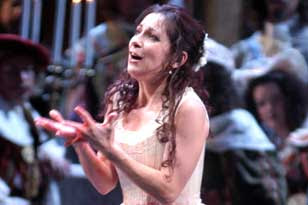 Believe it or not, this was my first Lucia di Lammermoor last night at the San Francisco Opera, so I have nothing to compare it to. I did read Scott's The Bride of Lammermoor, though. Does that count? At the end of the novel Edgar rides his horse into the bog and disappears into a pool of quicksand. I love that.

There was no quicksand at the opera, but there was the heather on the hill. Two operas set in Scotland in one week is pretty strange. The production for Ariodante did not hint at Scotland at all, though one of the characters was the king of Scotland.

There was a serious attempt to suggest a Scottish landscape with a lot of stubby little plants. Lucia lives her real life romance there and her insanity imagined romance there. There were tartans, the essential Scottish object, but no one wore kilts.

Giuseppe Filianoti, the tenor Edgardo, would have looked great in a kilt. He fulfilled all the hunky requirements for the romantic lead. He sang with a distinctly Italian style and technique but couldn't quite keep it up. This role seemed a struggle for him. I can't imagine why he thinks he is ready to sing Don Carlo.

Gabriele Viviani, the Italian baritone who sang the evil brother, I liked a lot better.

Once again I believed in Natalie Dessay, in her youth, in her love, in her madness. It was a pleasure.

Almost every note of the soprano part is recorded on various sopranos' aria albums, but I'd never heard the tenor's stuff before.
Posted by Dr.B at 10:24 PM

My absolute favorite "Lucia" on CD features Anna Moffo and Carlo Bergonzi. It's one of those RCA Italia studio recordings from the 1960s. Tons of people rave about Sutherland's Lucia, but I've always believed her voice was too heavy for the role -- especially after hearing Moffo's light-as-air rendition.

I am so sorry for your opinion about my Edgardo. Please, don't write nothing about me and my future performances. Especially for Don Carlo. Thanks for your help.

I won^tbe seeing the Don Carlo. I only write about what I hear. I think he is a great talent which needs greater consistency.