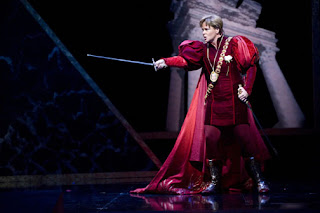 Last night was Handel's Ariodante at the San Francisco Opera with Ruth Ann Swenson and Susan Graham. All the really great pieces are for the lead male, sung by Susie. She was fabulous. Ruth Ann was good but not fabulous.

Also on the bill was Sonia Prina making her American debut in the role of Polinesso. Did she make us not miss the great contralto Ewa Podleś (last name pronounced PODE-lesh) who was originally cast in this role? Almost. She was quite villainous and has an interesting dark voice--not the miracle that is Ewa but quite nice.

I didn't realize this was only Susan Graham's sixth appearance with the SF Opera. In the same season she did Octavian (with Fleming) and Dead Man Walking. I thought there must be more. Maybe I've been watching too much DVD.

The production for this opera was pretty but painfully old-fashioned. I think the current popularity of Handel around the world comes in part from how suitable he can be for the Eurotrash treatment. I missed it. After all, the nude men Alcina is one of my favorite DVDs. I was also quite fond of Semele as Marilyn Monroe and Jackie Kennedy. Il Trionfo del Tempo e del Disinganno done as four people hanging out in a Zurich cafe was also pleasing.

This opera was my first encounter with Pocket Opera when I first moved to San Francisco. Ariodante was sung by the wonderful Stephanie Friedman.
Posted by Dr.B at 3:15 PM

Pocket Opera is just so cute. I really should go hear them more.

Would that that 1999 Alcina had been legally filmed. The clips on YouTube, especially of Natalie Dessay in that little french maid's uniform, are awesome.

And I totally agree that Susie was marvellous as Ariodante. Operatattler says that it was filmed, so I am hoping to see it somehow - cinecast, DVD, TV, whatever.