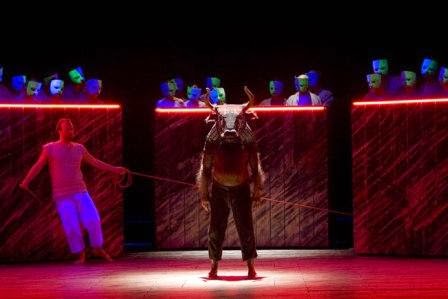 Someone persuaded me to take an interest in Harrison Birtwistle's The Minotaur.  Someone at the New York Times liked it.  So I bought a DVD.

The plot is the incidents that took place just before Strauss' Ariadne auf Naxos.  The Minotaur is in the labyrinth, and his half sister Ariadne looks out for him, makes sure people sent to Crete to provide dinner for the Minotaur find their way into the labyrinth.  The Minotaur doesn't care for bread.

We are 45 minutes into the opera before Asterios appears and 57 minutes in before he sings anything.  If you like opera as orchestral tone poem with only incidental singing, then you will like this.  If, like me, for you opera is about the singing and you don't really care what is going on at the same time, you will hate it.

The Minotaur groans as he kills his victims in full view of the audience.  The vultures come in afterward to eat what remains of them, screeching hideously. 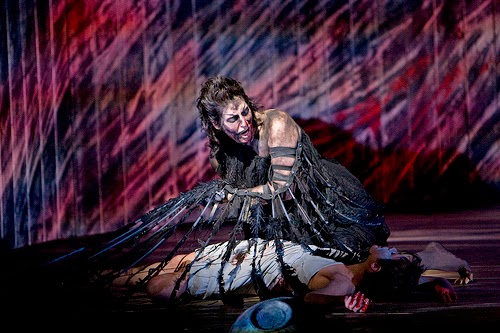 Sorry.  No singing, no opera.  Think how much better we might enjoy this if a troupe of comedia del arte performers came in after say 20 minutes.

I do wish to comment on the orchestral part of the opera, though.  Modernism, the music of Bartok, Stravinsky and those guys, has died here.  We in America, represented by Glass, Adams, Heggie, have gone on to minimalism and other less harsh styles.  In Europe modernism appears to be alive and ....  I was going to say well, but, you know....  Birtwistle and Ades, and perhaps even Saariaho are very much modernists.  Our paths have forked.  I would need to conduct research to discover which path is the more successful.  The New York Times critics evaluate the fork by ignoring our half.  If it doesn't sound like late Stravinsky, it isn't classical music, apparently.
#ad

Thanks for the list. Too bad none of these categories draw enough public interest to be featured on the broadcast.

Speaking of awards, just returned from the Met Opera Rocky Mountain Regionals, where the Chinese bass-baritone Ao Li (member of SFO's Merola program) "tied" for first and is headed for New York to sing in the semi-finals. He was head-and-shoulders ahead of all singers yet the judges somehow decided that the day's second-best soprano (and we had her as sixth in a field of 12) was his equal. Staggeringly incomprehensible.

I've seen Ao Li and he's good. There mustn't have been any good tenors. Remember it's not how well they sing but whether or not their voice fits a certain category. If they can fit the person into a category, they're in.