The production of Lohengrin at the Bayerische Staatsoper in München is about construction. As an ex Bechtel employee, I felt right at home with house plans and construction equipment. Elsa and Lohengrin build together and then move into the house together once they are married.

This production must have been invented with Jonas Kaufmann in mind. Remember he is the opera singer who travels around with his box of tools. In this production he gets to lay bricks, plane wood, paint and set windows into frames. It is the perfect production for the handyman tenor.

The fight in the first act is played for laughs. Lohengrin fights with his back turned and wins by stealing his elderly enemy's sword. No wonder they are pissed. In the third act he kills by merely raising his hand, thus giving the thing away.

I totally bought the house metaphor and cried like a baby. What a dolt that Elsa is.

Now picture a glove. It is not an old glove, but it is exactly the right size. Picture hand sliding effortlessly into glove. Jonas is a Heldentenor. They always sound like baritones. He was better than even I had anticipated. The audience stamped the floor for him.

Kent Nagano conducted. He is someone my son knew in his early days in Berkeley. Bravo maestro. 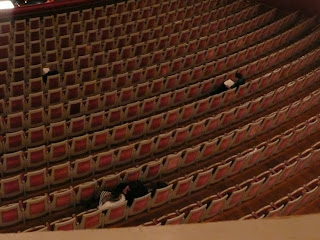 It was nice to hear German sung in Germany. You can actually make out what they are saying most of the time. We don't get that at home.

It is hard work to travel alone at my age, but the last two days have been a joy. My heart is full.

I apologize for not having any pictures of Jonas.