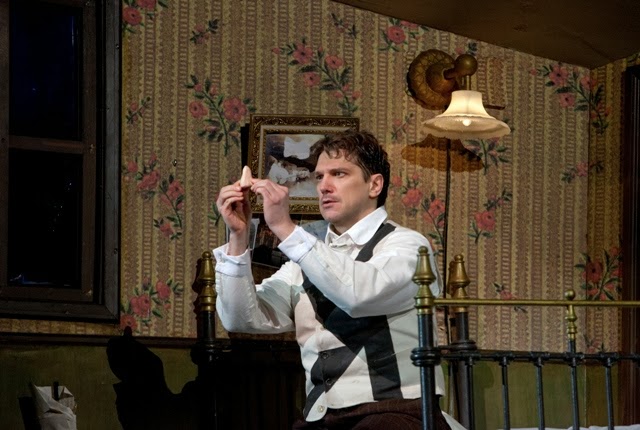 Today we were blessed with The Nose by Dmitri Snoztakovich live from the Metropolitan Opera in HD, sung in Russian.  You have no idea how long I've been waiting to tell that joke--stolen from Emily Pulley.

The only person to be interviewed for this simulcast was William Kentridge who explained that his own nose was the model for the character The Nose.  He turned to show us a profile.

This performance is an art work on three levels.

I.  The short story by Nikolai Gogol.  The opera plot follows this story, written between 1835 and 1836, very closely.

II.  The opera by Dmitri Shostakovich (1906-1975) written in 1929, an early work.  My reaction to this was that I was viewing an opera comique complete with spoken dialog.

III.  The production by William Kentridge, which is fully an art work in its own right.

Before I get too far into this, I feel that 2:15 is too long for an opera with no intermission.  A short period to relax, complete with an interview with Paulo Szot, would have made me enjoy this a lot more.

Every time there was piano music in the score there was a film of Shostakovich playing the piano.  The other person whose photograph frequently appeared was Joseph Stalin whose reign had just started two years before.  At this time Shostakovich had not yet fallen from political favor. 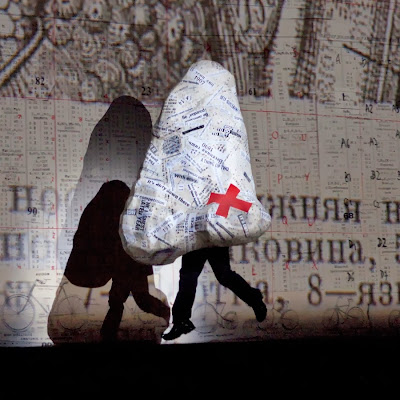 While his owner lounges around in his bedroom staring at himself in the mirror and feeling sorry for himself, the nose has a full and exciting life.  He participates in swim meets and track and field contests.  He loves to ride a horse, and rises to a higher place in the political hierarchy than his owner.  We see all this in the projections on the set.

There is a lot of crashing and banging in this score full of complex and varied orchestral colorings.  There are many soloists, supers, chorus and actors on the set.  I must say I really only enjoyed the parts where Paulo was on the stage.  He is a wonderful performer with great variety and presence.

I was asked on exiting the theater if I would go again to see Nixon in China, and I reported that I had already seen it 3 times in 3 different productions.  I love it, and they hate it.  Maybe once will be enough for The Nose.

This review is supposed to include an extended discussion of the deeper meaning of The Nose.  All I seem to be able to think of is that if a barber actually cut off your nose, your face would have a hole in it and not a flat piece of skin.  And occasionally I would remember the photograph of the man who is growing a new nose on his forehead.  Nothing was done to make Paulo seem not to have a nose.  Perhaps it is all a dream.

I shudder to think what ANY singer might sound like if they were required to perform as if they had no nose. It's pretty much a required element of sound production, right?

The turnout in our Denver auditorium (admittedly one of a dozen venues around the metro area) was an anemic 35-40, as compared to the typical 250-plus we usually see. General consensus was that it was weird, yet no one seemed to hate it. For such an off-the-wall opera, that could be praise enough. Szot was clearly the vocal star. Also, too much of the women's solo music was written in the screechy high register.

Agreed there should have been an intermission. One of the stranger sensations I experienced involved the blackout that could have served as that logical break point. Shostakovich's music for "The Nose" is so discordant that I first assumed the orchestra was playing an interlude, when in reality they were simply tuning their instruments to prepare for the second half of the opera.

24 people turned up for the encore in Indy tonight, which is pretty darned good considering it's raining and no more than that attended the encore of Onegin.

Most seemed to enjoy it (per conversation after the show) and there were several folks under 40 - even a couple twenty somethings...heavens! We have 5-6 local cinemas that do the Met HD; the live Saturdays are usually full, but I work most Saturdays so it's encore Wednesdays for me.

I enjoyed this a ton and would go again, if only to savor the stunning visual production -I' m sure there's things I missed.