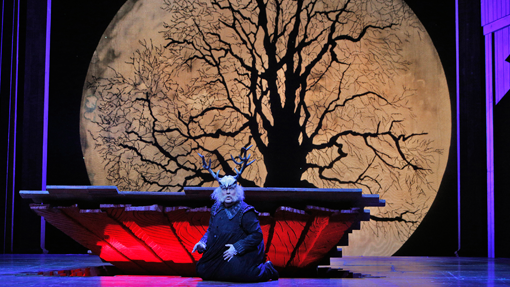 I noticed something I hadn't noticed before in Verdi's Falstaff seen last night at the San Francisco Opera:  Bryn Terfel enters Windsor Park in the final scene in his very Wotan-like outfit (see picture above), and some very Wotan-like music accompanies him.  My goodness.  Wasn't he doing Wotan....?

Heidi Stober was scheduled for Nannetta, but she was replaced by Lisette Oropesa who is singing the role at the Met.  Bryn was fabulous.  Meredith Arwady was excellent as Dame Quickly.  It was well cast and well sung all around. 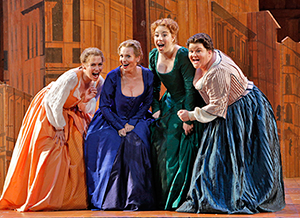 But.  You knew this was coming.  I couldn't get over how much easier it was to follow the plot in Portland.  Perhaps in Portland the Falstaff was less interesting and therefore the others stood out in comparison.

Remember I'm the one that thinks the production is supposed to explain the opera.  It didn't.  The hiding Falstaff while everyone searches was well done, but the characters were not really drawn individually.  Which is what I like.  I liked the linens being thrown all over the stage.  That was cute.

It is a problem for me to see the same opera over and over in close succession.  One cannot resist comparisons.  And there's going to be another one soon in HD.
Posted by Dr.B at 3:08 PM