The Girl of the Golden West 👍🏻 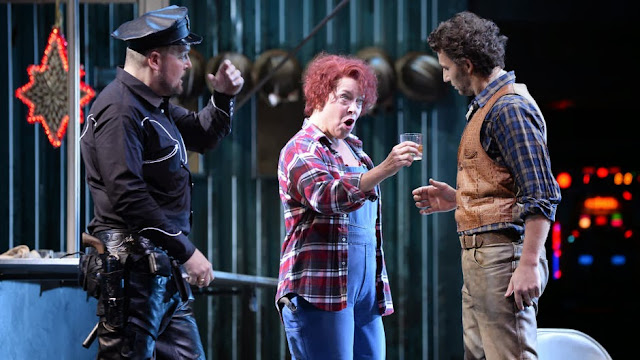 For Puccini La Fanciulla del West was his best opera. For me it has a special place because it was one of the works that we presented in Ulm while I was there. It was in German, sort of the Winnetou of opera. And yes, I have read the Winnetou books, Germany's answer to Zane Grey.

It is perhaps the most American of operas. Here I am in Sacramento watching a film from the Wiener Staatsoper, writing about a man who claims to be from Sacramento, a man who inherited a band of robbers when his father died. They are in the mountains above Placerville.  I will not tell the surprise ending.  Watch it for yourself.  I'll just say that from an American perspective it isn't as shocking as it is to Europeans.

How could you not love them? Nina Stemme's Minnie is a girl to love, a wild and passionate one who rolls around on the floor in the grip of first love. She and Jonas Kaufmann sing the shit out of it. It rises with them. Nothing is held back. If the singers can sing this big, the opera soars with them. I think it requires just this kind of no holds barred, wildly passionate singing and acting to make its effect.

The set looks more like Edmonton oil fields than it does like the California gold rush. Perhaps the Polka is a truck that stays parked outside the refinery to provide lunch and dinner for the laborers, guys that don't come from Edmonton.

Minnie tries to look like a laborer, too. She reads to them every day out of the Bible. They are now in the Psalms. She explains what hyssop is, which means she knows what hyssop is. She is a good girl who rejects their advances and has never danced with any of them. In return they all love her and bring her gifts.

I love the way she summons him.  "I want a man I can love like that," she sings, and there he is.

Dick enters and asks for whiskey with water. This is to make him look like a softy. She immediately remembers him because he said she had the face of an angel. For him she dances and brings home cigars to give him. For him she brings out her Sunday best dress, shoes and gloves.

He doesn't tell her about the other woman. What man tells a woman that he is seeing someone else? She is very naive with him. Perhaps he really likes her.  She tells him that she keeps the miners' gold in the saloon--he doesn't seem to coax it out of her--but he has already tried to find where it is hidden. She invites him to her cabin. All he's done is ask her if she lives in the Polka, and she has told him she lives in a cabin in the mountains. In this production she lives in a mobile home. Minnie may never have danced, but she knows how to cheat at cards.

Eventually Ramirez tells her everything, and she throws him out. He doesn't steal her gold. I think the intention of the opera is to show that this is true love, not just on Minnie's side but Ramirez's too. It is clear from the start that he might steal her heart or her money but would never cause harm to Minnie.  When she is guarding the gold in Act I, she looks him straight in the face and says that he can steal the gold, but he will have to do it over her dead body.  Perhaps she knows.  After all, he's only been a thief for six months. Perhaps their first meeting was before this. I refuse to think he's a cad like Pinkerton. In Butterfly Cio Cio San sings all the big emotions. In Fanciulla both must sing the big emotions, and in this production they did.  I have never loved it so much as here.

Dear Puccini, I think I too will love it best.

My admiration of JK is no secret, and I have to add now I am a HUGE NS fan. She is indeed lovable, and so expressive, as she wrestles with puppy love, fear, excitement; her face shows it all! Yay Nina!!

I'm on my second watching. What a wonderful pair of singers! And the acting - top notch from all, including the baritone who is vocally outclassed but does a great job anyway.

The whole cast is excellent. The performance standards of the Wiener Staatsoper are very high.