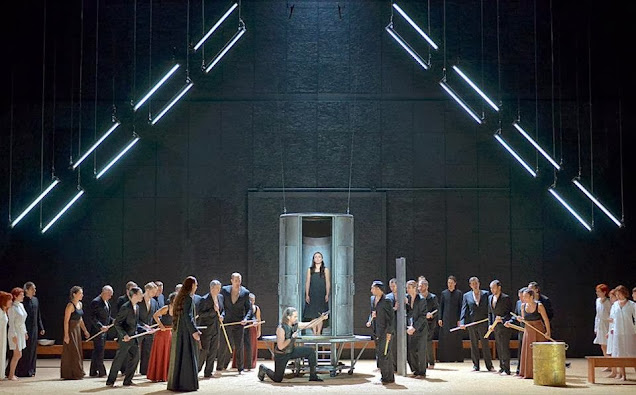 This morning Gaspare Spontini's masterpiece La Vestale (1807) is streamed from Paris, Théâtre des Champs-Elysées, via medici.tv. Once long ago I read Berlioz' Evenings with the Orchestra--highly recommended, actually.  Monsieur Berlioz had a friend who played in the opera orchestra in Paris, and he allowed Berlioz to view the opera from this in front of the front row perspective.  The book is a memoir on this experience.  All the sources say this is fiction, but I didn't know that when I was reading it.  He wrote about his loves and hates at the opera, and my memory tells me that most beloved were the performances of La Vestale.  This is my first opportunity to view this opera.

Does it sound like anything?  The date is before Rossini and even before Fidelio.  The composer is Italian, but I hear more Gluck, a very formal and intense Gluck.  The expected Italian coloratura is missing.

I see there are 2 full length films of La Vestale on YouTube, one stars Denyce Graves and the other Leyla Gencer, but both are audio only.  In my mind it's Callas, and I see on Amazon that there is a CD version with Callas and Corelli.  I enjoy Beatrice Uria Monzon more than Ermonela Jaho. A mezzo could sing Julia.

I have gotten used to the modern minimalist stagings with only modern clothing and the least possible stage decoration.  People in suits without shirts are soldiers.  Women in slips with red hair are the vestal virgins.  Did I mention La Vestale translates to the Vestal Virgin?  When Lucinius goes off to war, Julia's father makes her become a vestal, while she is in love with Lucinius.  He is a Roman general and is making his triumphal return.  Julia is chosen to crown him--they arrange a date during the ceremony.  Minimalism takes a lot of the fun out of this.  In my brain they are parading through the forum to the rostrum, like Caesar in the movie Cleopatra.

She is assigned to guard the sacred flame.  Hanky-panky ensues and she lets the flame go out, a capital offense.  The goddess relights the flame, and there is a happy ending.

This opera was wildly popular for about 20 years, and then nothing. I think someone truly fabulous could bring it to life, but for me it's almost a Spieloper (a light opera popular in 1830-50).  Maybe you have to be French.