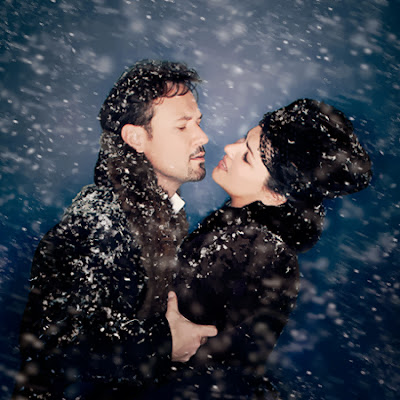 Onegin and Tatiana in the city

I have long been an admirer of Chekhov, the Russian writer of plays and short stories, so when Peter Gelb compared his new Metropolitan Opera production of Tchaikovsky's Eugene Onegin to a play by Chekhov, I was prepared to enjoy it.

I liked enormously the sets for the house in the country.  It created an atmosphere of reality and strengthened the sense of the relationships between the characters.  There was too much contrast in the last act with the bare stage and huge columns.  There was no sense of artistic unity for the opera as a whole. 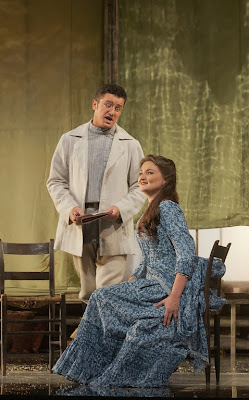 Lensky and Olga in the country

The beginning and ending had a new symmetry.  As Onegin rejects and coldly dismisses Tatiana, he looks at her face and kisses her before walking away.  Netrebko's Tatiana rises to equal Onegin's coldness and arrogance in the final act.  She tells him she loves him but will not sacrifice her life for him.  She stares him down coldly and then kisses him before she walks away in the snow.  There was a kind of perfection to this.  Perhaps Mariusz is the right singer for this conception after all.

Netrebko sang extremely well, giving the letter scene a special intensity.  Alright.  I'll say it.  She looked terrible in the girl's dress.  But the mature Tatiana's outfits made her look beautiful.  Few singing actresses could bring so much strength to a character.

I couldn't help wondering how this would all play in the house.  Chekhov is not for the huge theater.  Could the softness of the singing be heard in the house?  Could such an intimate and interior conception be seen, heard and indeed felt in the huge expanse of the Met?  Chekhov's sense of humor seemed to be missing.

Beczala was the best Lensky ever.  My favorite was the Nurse, a wonderful actress.  The sense of it all being truly Russian was very powerful.  I would like very much to see this kind of treatment of Pique Dame which somehow just misses for me.

P.S.  Netrebko seemed to be in the mood to argue with Debbie in her interview.  I wonder what that was about?

PPS.   The plot of Onegin is from Pushkin (1799-1837). I know that. What was being discussed was the PRODUCTION which was moved to the time of Tchaikovsky (1840-1893) which it just so happens overlaps with the time of Chekhov (1860-1904). My remarks referred to the production and not to the opera.   Gelb is the one who brought up Chekhov.  I liked this and went with it.  The production comes from British theater people who are undoubtedly far more familiar with Chekhov than with either Pushkin or Tchaikovsky.

A truly Chekhovian ending would require much more ambiguity.  Instead of perfect symmetry we would need to be left wondering if perhaps they might get together on occasion, just as we are left wondering in the story "The Lady with the Little Dog."  If she is not required to sacrifice her life and her husband, would Tatiana occasionally meet with Onegin in secret?
#ad

Sorry, what? Oneghin is Pushkin not Chekhov

The plot of Onegin is from Pushkin (1799-1837). I know that. What was being discussed was the PRODUCTION which was moved to the time of Tchaikovsky (1840-1893) which it just so happens overlaps with the time of Chekhov (1860-1904). My remarks referred to the production and not to the opera. Gelb is the one who brought up Chekhov.

This opera came with pumpkin lattes.