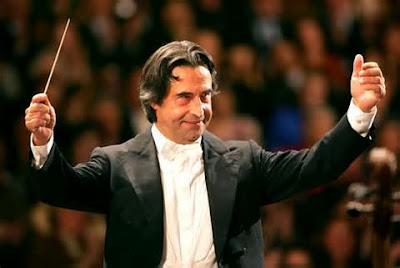 My usual translation from Kurier.

"We are talking with God, thank Verdi"

Not only is he one of the greatest conductors of the present, but also one of the leading Verdi experts. Currently Riccardo Muti is rehearsing Verdi's "Messa da Requiem" in Chicago, that will be experienced on the 10th October via live stream on KURIER.at ( see details below). The Neapolitan maestro in conversation.

KURIER: Maestro Muti, your interpretation of the Verdi Requiem is transmitted via live stream.  A concession to the new media ?

Riccardo Muti: Rather a concession to Giuseppe Verdi. We want to reach as many people as possible with this transmission. Everyone should have the opportunity to hear Verdi's wonderful music. It's not about to make Verdi even more popular. This is hardly possible. The point is rather that millions of people around the world feel this music at the same time and through this music are linked to one another.

Do you think that music can unite people ?

We live in a society with so many problems. There are wars, crises,  poverty and misery.  I think music can bring people together, because it is a universal language that everyone can understand. Whether through this something has improved, I do not know.  Maybe it's just a dream. But definitely one that you should dream.  In music it should not go primarily to the personal success of the performer, but to a message of humanity.  If you will, to Verdi's message to mankind. If Herbert von Karajan were still alive, he would, however, certainly be the most fervent ambassador to the new media.

What do you personally associate with Verdi's " Requiem"?

I conducted the requiem for the first time in the 1970s. In a basilica in Florence and at the graves of the Borgias. I'll never forget this. Verdi was a Catholic in a very liberal sense. He speaks here to the basic problems of humanity. We speak, thank Verdi, directly with God.  In the sense: You created me, so save me also.  It is a demanding Requiem, and Verdi leaves us in doubt. But as in all his works, by the way also in the operas, Verdi's gaze is always directed towards the heavens. Although Verdi had doubts about what may be after death.  But he knew that answers to this question are a need of the human soul.  In this respect we take a journey into the heart of our soul.

You grant in your new book "My Verdi" intimate insight into your musical understanding and criticize the present treatment of Verdi ...

We have in the Verdi year 2001 on the occasion of the 100th anniversary of his death missed the opportunity to study it again. Now we have this opportunity.  Because we are often very far away from what Verdi wanted. The performance practice has since made ​​many mistakes. And the audience has become a bit sloppy since.  Everyone is waiting only on high notes, and wanting Verdi to be sung like Puccini.  That is completely wrong. Verdi is a classical composer and stands much closer to Haydn than to Puccini. Nevertheless, one must not play him on original instruments, that would be a sacrilege. But this fact should be borne in mind. And then there are also directors ...

... where you basically stand very skeptically opposite  ...

What some directors do there is a single insult to Verdi. But also an abuse of the singer and an affront to the thinking audience. Unfortunately we have too many of these so-called "clever" directors who even delete roles if they don't like a character, who cannot even study the score, who impose their so-called "ideas" on each work. I refuse to be a part of this.  [Bei so etwas mache ich nicht mit.]

So one should stage Verdi entirely classically?

Beware, one thing must not happen: Verdi did not want any "show business" [in English]. Neither scenically nor with swanky voiced singers. Verdi was a man of the theater, he knew exactly why he wrote the way he did.  Everything is there in the scores.  One needs only to look at them.

Is that one of the reasons why you rarely conduct opera?

As well. But there is another reason. It lies with the houses themselves and their scheduling . When I study a new opera, I need to do this conscientiously, at least a month's time. But this time is rarely given. But I do not accept when singers or conductors arrive a week before the premiere, to then bring in a botched action something on the stage. Unfortunately in this regard the Vienna State Opera also doesn't give me the time required.

Very much so. Vienna is a great city with a very fine and educated audience. And of course there is the city of Vienna Philharmonic.  I love this orchestra.  I have learned so much from the Philharmonic in the course of my life and I'm always happy to come again for concerts.  But as for opera in Vienna or Salzburg, then: You should never say never.
Posted by Dr.B at 6:49 PM