David with his theorbo

I've started reading Singing in Style by Martha Elliott, subtitled A Guide to Vocal Performance Practices, and I am going to be boring you in future weeks with bits from it.

She starts with John Dowland (1563 – 1626 and Giulio Caccini (1551 – 1618), of course.  Dowland accompanied his songs on the lute and composed in tablature.  Baroque tablature was very similar to modern guitar tablature, and made it possible to write out the whole piece in a form that others could play as is.  Caccini and the Italians composed in score with just melody and bass, expecting the player to fill the other parts in to the best of his ability.  I like it that she says that Caccini recommended accompanying yourself on the theorbo which would have stronger low notes than the lute.  At least now you could find a theorbo.

As an old person, I remember when we had no idea how these pieces were actually composed, except we were aware that figured bass started around this time.  We selected a printed realization we liked and went with it.  Ms Elliott recommends that you acquire an original facsimile of your piece.  She provides one sample by Monteverdi.  I think maybe you have to actually go to the library for this, though I see there are facsimiles on line.  She wants the singer to take responsibility for his own performance.  I searched for quite a while for a small sample of a facsimile lute tablature by Dowland but did not find one that I could show.  Amazon sells something in tablature form, but it cannot be downloaded and isn't a facsimile.  One source says that published facsimiles of lute music are rare.  Caccini was easier to find.  Note:  bass is already figured: 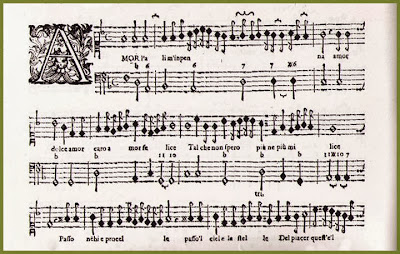 In the early Baroque everything is much harder than you thought.

This first chapter includes an extended discussion and quotes from historical sources about vibrato, tremolo, trill, etc.  It is very important to realize that true knowledge of the constantly fluctuating singing voice required modern technology.  It is only when you record the voice on a graph that you can see that it is always fluctuating.  It even fluctuates as it slides from one note to another.  It is not possible to truly understand this using the ear alone.  It is important to make this modern interpretation of ancient sources.

I have discussed this topic here, here and here.

My own discussion of singing in the Italian Baroque had only to do with the prominence of castrati and preference for high voices.  I don't know how practical it is to require everyone to become a musicologist.  Perhaps if you major in theorbo this would be necessary.