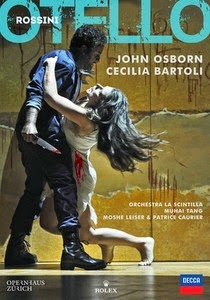 This DVD of Rossini's Otello (1816) from the Zurich Opera records the same series of performances I reviewed here from a live stream on medici.tv.

The plot of this opera is not the same as Shakespeare or Verdi.  It is clearly an opera seria but shows none of the traditional traits.  Twelve years before La Muette de Portici changed opera forever, the two main characters die.  This was unheard of.  My researches tell me that this opera was provided with an alternate happy ending, but we in the English speaking world would be outraged.  There are four scenes.  All of the action takes place in Venice rather than Cyprus.

Act I
In the Doge's palace Otello is presented to the Doge as the hero of a recent battle where he recovers Cyprus for Venice.  He has already married Desdemona, but this is a secret.  Desdemona's father Elmiro has a candidate to marry her in Rodrigo.  Otello announces that he and Desdemona are already pledged to one another, enraging Elmiro.

In this version Desdemona contributes however innocently to her own doom.  She writes a letter to Otello and encloses a lock of her own hair, but the letter falls into her father's hands.  In order to prevent an argument with Elmiro she tells him the letter is intended for Rodrigo.  Jago tells this version to Otello who believes him.

Act II  Scene 1
We are in Desdemona's room in the palazzo. She tells Rodrigo she is Otello's wife.

Act II Scene 2
We are in Otello's hangout, a dump with a pool table and refrigerator.  Not only is Otello black, but he is not from Desdemona's social class either.  There are simply too many things against him, hero or not.  There are small issues of continuity in this scene but they shouldn't distract from the incredible singing.  Jago stirs the pot.  The ever hovering Emilia is there to save the situation.  Desdemona has a mad scene here and pours beer over her head.  P.S. I now interpret this as defiance of her father who has come to take her home.

Act III
We are in Desdemona's room in the palazzo.  She writes "Nessun maggior dolore che ricordarsi del tempo felice"  ["Nothing is Sadder than the Memory of Happiness."] on the wall.  She sings a very beautiful rendition of the willow song.  She kisses Emilia because she knows she's doomed.  When Otello arrives, she is angry and defiant with him, very different from Verdi.  Otello kills her then himself.

John Osborn as Otello is in black-face.  Since race is the whole point of the story, this seems right.  Black-face is a comic minstrel tradition only in the United States, so criticizing a French/Swiss production for doing it would seem pretty silly.  It is shocking how much Otello hates Desdemona.

Cecilia is taking on heavier repertoire these days, and Otello seems on the heavy end of her abilities but still well within her grasp.  She is very intense here.  Someone asked me about her the other day.  She was everywhere for a while and then suddenly she was gone.  I explained that her Columbia Artists Management manager moved back to Europe and she along with him.  I followed her there, at least in spirit, but for most Americans she ceased to exist.

This is an outstanding sample of her work now, her emotional intensity turned to serious drama.  This is bel canto at its most serious extreme.  For people who hate regie it won't work, but I'm not one of them.  Perhaps you aren't either.  Love it along with me.
#ad

Dear DrB, what does 'regie' mean? 'People who hate regie...'? Surely not the German sense of the word, isn't it?

Regie in American terminology is a shortened version of Regietheater, which is where the director stages the opera in a way that is completely different from the original staging. This is far more common in Europe than it is in America. We're still pretty old fashioned.

Thank you for explaining. For me as an European I don't find this to be too modern, it could be worse. ;) And of course, Cecilia's appearance gilds it. Very intense, very true.

I worked in Europe and hardly notice. Cecilia is always so true emotionally.

Oh yes, she is. This is one of the best things about her. And her voice. And her laughing. And her curiosity. And her passion. And her appearance. And her - well, you know.

Will you come to Salzburg this year's whitsun? 'La Cenerentola' will obviously be quite modern, too. I saw some fotos of the rehearsals on Javier Camarena's Facebook account. I must admit that I do like traditional staging and dislike too rude transferences. In 'Giulio Cesare' for example, I came to my limits - on the other hand, I had a lot to think about and to make up my mind. So at least they make the people talk and think about.