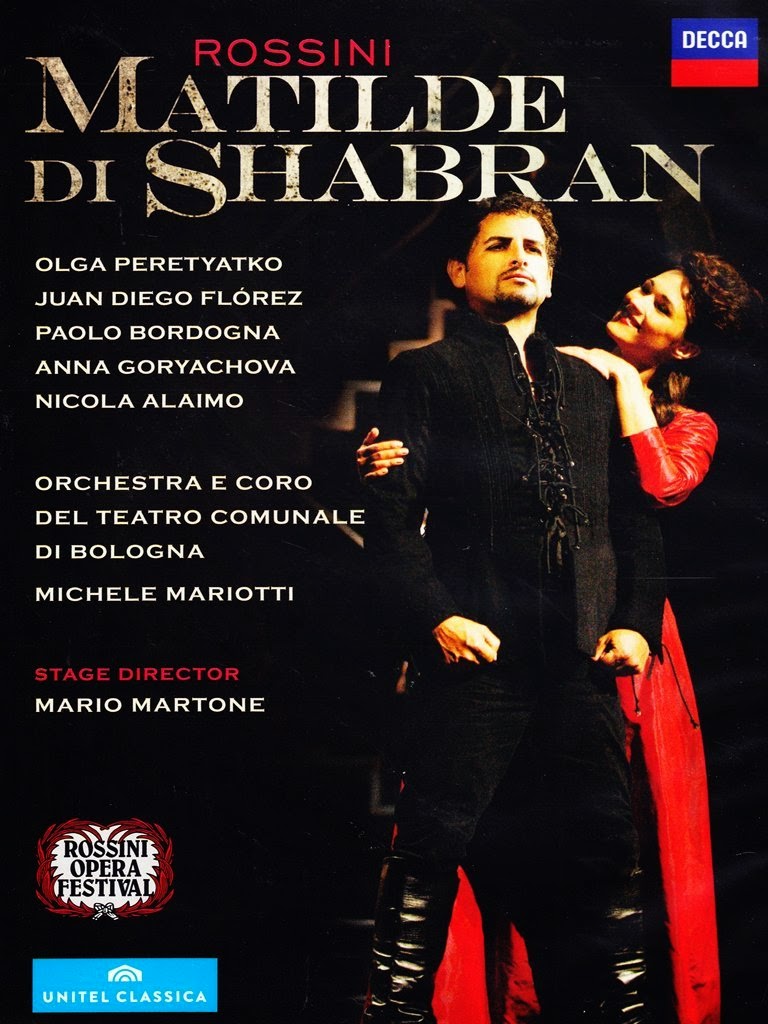 I'm not sure why I decided to buy this DVD of Rossini's Matilde di Shabran, but it turned out to be a great idea.  It's called an opera semiseria or melodramma giocoso which means it is somewhere between seria and buffa.  It also uses a new kind of love plot--love as a weapon of women's power.

We have Corradino, a tenor who hates women and believes only in the warlike qualities of men.  We have Matilde, an orphan assigned to the care of Corradino who believes very much in her own sexual power over men.  We have Edoardo, a prisoner of Corradino and his rival.  We have the almost buffo bass Isodoro who appoints himself court poet.  We have Contessa d'Arco who has been promised to marry Corradino in a treaty.

Florez and Peretyatko are very well matched vocally and theatrically, which is to say they are both magnificent.  We can easily believe in the raging hero and the beautiful triumphing soprano.  They meet and he immediately falls in love.  It wouldn't make an opera if he didn't.

All the other characters are also well cast.The music is very much reminiscent at times of Rossini's buffo works, but when the story gets serious, he becomes a bit more original.  There is a period of extended storminess, but in the end female charms triumph over everything.

The singing is outstanding.  The production is traditional and formal.  It has a large and very spectacular role for coloratura tenor.  The relatively minor part of Edoardo has lots of spectacular singing as well.  Matilde says at the end, "If you want me, you must open your heart to goodness."  That Rossini is quite a guy.

At the premier in Rome a riot followed the performance.
#ad

I thought this was suitable because I can't see Cenerentola until Wednesday.