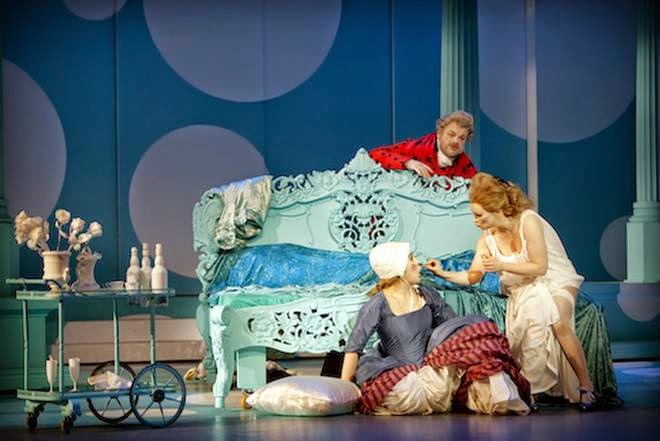 I watched the first act of a production of Der Rosenkavalier stream on sonostream.tv from Malmö, Sweden.  The first act is the only part that is truly wonderful, plus the trio at the end, of course.  It was done as though it were a clown troop.  The only pieces of furniture in the room were the bed and the little cart with the chocolate, so all those people that come in during the scene had to sit on the bed with the usual bed activities.  The costumes all had polka dots, like clowns.  I didn't notice big shoes, but I did notice polka dots on people's faces.  They needed a public opinion character like in Orpheus in the Underworld to disapprove of everything.  The singing wasn't good enough to compensate for this.

Remember Mimi in La Boheme must die on a certain chord or the scene makes no sense.  You should also recall that Richard Strauss's earliest compositions were tone poems with stories.  He bragged that he could compose the knives and forks.  And so he could.  What you are seeing and what you are hearing go together.

For instance, Mohammet's music describes how he moves about the stage.  Can a full grown man do this?  A ballet dancer, perhaps, which isn't at all what we got.

The plot cannot be moved from the period when women were traded like cattle.  When Sophie asks her father to let her out of the marriage, he refuses.  The whole rest of the story is Octavian proving that Ochs is unworthy, so daddy will not insist Sophie marry him.  If the plight of women is just a joke, then what's the point?

I immediately began to fantasize an Iranian Rosenkavalier with burkas since that part of the world still enslaves women.  But there might be bombs, so let's forget that.

Unrelated comment.  If you watch enough opera in closeup, eventually you will notice that in the bows the singers often look at the prompter.  What's important here is that during the performance, you didn't notice them looking at him.

I just noticed at the end of one opera (Ariadne, I think) that one of the principle singers actually shook hands with the prompter. At least I assume it was the prompter. More like a hand in a box. Like on the Addams Family. "Thank you, Thing!"

There is currently a scandal with regard to the current production of Rosenkavalier at Glyndebourne. The mezzo is being criticized for her looks. I've seen pictures. It is the job of the costume and maske (whatever it is at Glyndebourne) to make sure the performers look good. I assign the failure to them, not the singer.