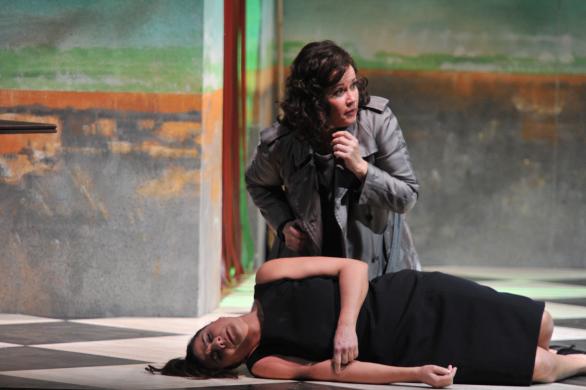 The streamed version of Rossini's Otello was both unusual and pleasing.  This opera was produced at the San Francisco Opera only once-- in 1994--with Chris Merritt, Bruce Ford and Cecilia Gasdia.  I remember only the Willow Song.

Since my research on Rossini opera seria a few years ago, I am very much aware that the Rossini gimmick accelerando music usually appears only in comedies, but in Otello it makes frequent appearances, including the beginning of the overture.  We feel on familiar ground.

The casting of the characters is quite unusual by modern standards.  Six of the characters are tenors, just as in Armida the following year, one is a bass and both women are mezzo sopranos.  This isn't Shakespeare--Desdemona's father is an important character, for instance--and Rossini doesn't hesitate to expand the female roles.  However, he does not expand them into a love duet between Desdemona and Otello, which changes the emotional dynamic of the whole opera.  The time of happiness is already past.

Our Rossini tenors, mainly Brownlee and Florez, are chosen for comedy and have relatively light voices.  The tenors appearing in Zurich are more along the lines of Chris Merritt and Rockwell Blake, robust and very dramatic.  I especially liked John Osborn as Otello in a natural wig, Javier Camarena as Rodrigo, and Edgardo Rocha as Iago.  There are some wonderful tenor duets here.  The miking is a bit heavy, so it is difficult to tell how they would sound in the house.


The production is 21st century minimalism--dark clothes, spare sets.  The only visual hint that we might be in Venice is the giant glass chandelier hanging in the first scene.  Cecilia wore black or white.  Liliana Nikiteanu as Emilia wore casual clothes and behaved in a completely casual way.  She exists only for Desdemona, who kisses her at the end.  Everything else is somber in the extreme. This opera is about racism and sexual cruelty.

I have seen Cecilia Bartoli act in many different operas, and each time her intense physicality dominated the character.  We could hardly have known her here.  Her body is stiff and straight, and except for pouring a bottle of beer over her own head, her movements are all quite constrained.  Her face is stiff and full of sadness.  We know we are in a tragedy which darkens and deepens as the opera progresses.  This darkness carries into the "Willow Song"--the greatest version ever, topping all of her former performances.  After all, this is its true context, and the somberness adds to the intensity.  We got to see her smile only in the bows at the end.  I was very moved.

Otello kills himself and the others kick his body.  There isn't nearly enough Rossini opera seria in the opera world today.  Muhai Tang conducted.