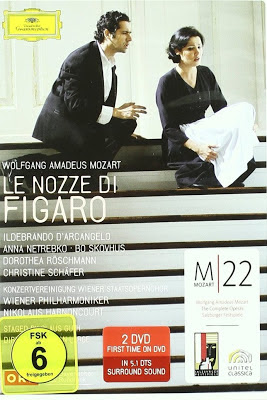 I don’t know why I didn’t see it before. I have no excuse. We are deep into minimalism, right? I have identified a minimalist period beginning in 1975 with Glass’ Einstein on the Beach.

So German opera is deep into minimalist productions. The setting is always an unspecified present--vaguely contemporary costumes of no particular fashion. This style of production is everywhere--I almost wrote ueberall--though other types of productions are still around. Semele in New York City and Manon in Los Angeles are too specific to qualify.

In the Salzburg La Traviata it is done with a huge white band and sofas from Ikea.

In Freischuetz a large black object with steps and a doorway is the only set.

La Juive is done in two levels to symbolize the two worlds of jews and catholics.

I suppose Pamela Rosenberg’s productions were mostly in this style as well. Certainly the infamous Alcina where the heroine constantly changes her always black outfits was.

And of course the costumes are mostly black and white. The red dress in Traviata seems the only exception.

And in this Figaros Hochzeit from Salzburg there are stairs, doors, windows, but no furniture and no color.

Early in Act I Figaro finds a dead crow and throws it out the window. Oh, and there’s a cupid, a character dressed exactly like Cherubino (Cherubin d’amore) except with a pair of dainty wings. Cupid, called Cherubim in the credits, is an actual boy who bounds up the stairs two and three at a time, showing us why Cherubino never quite seems like a real boy. I’ve never seen a girl singer who could get that much into her body. It is cupid who keeps the emotions always in turmoil. He flings the characters around like rag dolls and seems to be controlling the action.

Cupid’s work is more blatant here by far than what I am used to. (In fact I went to an amateur production of Figaro in the Austrian embassy last night, and they presented it in a much more traditional style. Maybe more later.) There is quite a lot of kissing. The count kisses Susanna, and his wife sees him, perhaps explaining her feelings in “Porgi amor”.

Most transformed is the scene in the Countess‘ bedroom with the Countess, Susanna and Cherubino rolling around on the floor together. They don’t make it to the dressing up part and only manage the undressing, though not going all the way to nudity. Cherubino enthusiastically kisses both Susanna and the Countess, and is given mini love-making lessons. This changes completely the following scene and explains much more vividly the Countess’ guilt. Making the sexuality more overt certainly helps to explain the plot.

Cupid rises to the level of a concept, but the rest is just generic minimalism. Minimalist productions serve to make vivid the true meaning of the emotions deep in the opera. They are clarified in broad simple gestures.

However, it must be said that this Figaro is not at all funny.

Anna Netrebko is a very inward Susanna, and Dorotea Röschmann is a more interesting Countess than the last time I saw her in London. Christine Schäfer played Cherubino. I didn’t recognize any of the other names but thought that the mix of voices in the ensembles was especially good. In particular, Netrebko and Röschmann go well together. Harnoncourt, the conductor, is heavily booed at the end.
#ad