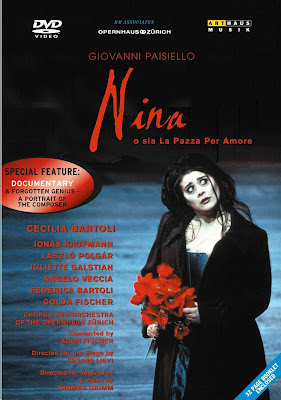 I have been threatening for years to review all of Cecilia Bartoli's releases. I still might do this, but today I felt a need to see something that is completely the opposite of the recent Otello.  Cecilia at her most physically dynamic has to be Nina, o sia la pazza per amore (2002) by Giovanni Paisiello.  What a mess she is in this, with scraggly hair and an over-sized coat.

Nina is hard to categorize.  For one thing there is spoken dialogue, which as you know never happens in Italian opera, either seria or buffa.  The cast is chosen for their ability to speak convincingly in Italian.  It's most like an opera comique, I suppose, with lots of simple songs and arias, and a few recitativo accompagnato.  Nina is roughly contemporary with Don Giovanni.

The pastore (Jonas Kaufmann before he became famous) sings a song for Nina and then suggests perhaps she should sing something.   She responds with "Ah, lo previdi", recitative and "Ah, t'invola agl'occhi miei", aria, K272, a concert aria by Mozart. As a rage aria, it seems to fit well into the plot.  She stands formally and lets it rip.  Maybe if she writhed around on the floor during this part, too, we would accept it more easily.

One alternately laughs and cries.  One isn't sure which is more appropriate.  She is obviously enjoying herself, and is definitely quite pazza--jumping, running, flopping down on the floor or on the strange object on one side of the stage, alternately crying, smiling, frowning, laughing or perhaps temporarily sane.  It is all a wonderful pleasure to watch.

Cecilia's sister, Federica Bartoli, is in the cast.  She is one of the women's chorus and occasionally speaks a few lines.  She is the one Cecilia knocks to the floor in Act I and who combs Cecilia's hair in act II.

My other favorite cast member is László Polgár as Nina's father.  He's so wonderfully sad and somber.

Lindoro comes back and there is a happy ending where Nina tries to undress him.  Nina will always be pazza, but the mad ones are best.  Bartoli goes on being mad to the end.  In the bows she eats the bouquet again.

Cecilia does everything to excess, an approach that I highly recommend.  Adam Fischer conducts.