Is Porgy and Bess Racist 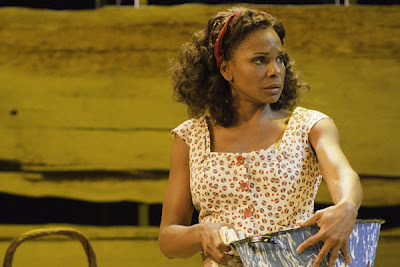 Porgy and Bess is on my mind right now--I'm not really sure why.  One of the questions that constantly arises is whether or not P&B is racist.  My research has led me to this interview last October with Audra McDonald in the LA Times.

Question: Obviously one of the critiques of “Porgy and Bess” is that, even at the time it was written, but certainly in 2011, the view of black American life is racist. Do you share that view?

McDonald: When I first was exposed to “Porgy and Bess” many, many years ago, I was blown away by it — loved the music, overwhelmed by the production at the Met that I saw and thought I want to play Bess someday. But I also knew they were stereotypes that were considered racist. And lots of people, lots of African Americans and African American performers who play these roles have trouble with the stereotypical way in which these characters have been drawn. They’re called archetypes, but a lot of people call them stereotypes as well.

And in a lot of the research that I’ve done on this piece, learning about the history of it, the many different versions of it that exist and will continue to exist and will continue to morph as this piece goes on into the 21st century, I know George Gershwin and DuBose Heyward were writing this piece from a place of love and from their understanding of African American culture. But they were still outsiders in that culture, and therefore they can’t possibly have perfectly drawn fine lines for their characters, because it’s an outside culture, especially at a time when there was no race mixing to speak of. And also it was a time when it was the law in many parts of the land that, yes, black people don’t come to the theater the same day as white people come to the theater in the Jim Crow South.

Question: I read that a cast in Washington, D.C., protested that.

McDonald: Yes. The original Porgy refused to play the theater in Washington, D.C., until they [admitted a mixed-race audience], and it went back and forth and back and forth, but finally they desegregated that theater for the first time.

Question: What do we see in Bess in this production that we didn’t see before?

McDonald: I have no idea because I haven’t seen every production that’s ever been. All I can see is what our goal is, to really focus on these two people and the effect they have on each other’s life, the effect they have on the choices they make, the fact that Porgy becomes more of a man, not just in a sexual way but really tries to overcome his handicap; it’s a means to become more of a man because he’s got something to live for now that makes him feel that he can walk like a natural man and be there for her — “I’m going to take care of this. I will take care of Crown. Crown is my business.”

As far as Bess is concerned, she’s really struggling with her addictions, struggling to overcome them, really has that vision of herself in Porgy’s eyes. For her it’s staying away from her addictions long enough so she can walk toward that vision of this whole worthy woman, worthy of being loved. And there’s a beautiful passage in the book by Dubose Heywood — since the book actually gave us a lot more information — there are other men out there, but Bess says, “But God only made one Porgy, and I can only be decent with you because there’s no one like you” — I’m paraphrasing. Bess realizes that it’s Porgy that keeps her strong. It’s her reflection in his eyes that gives her a vision of what her potential is. They both do that for each other. The tragedy is that Porgy is taken away from her. She can’t hold on to him.
Posted by Dr.B at 9:25 PM