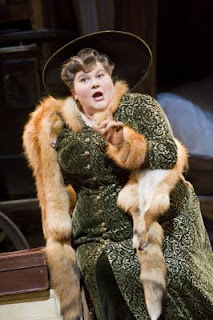 The San Francisco Opera presented the Natalie Dessay version of Donizetti's La Fille du Regiment without Natalie. Diana Damrau who sang Marie maintained the high level of slapstick comedy established by Natalie. It is simply a very pleasing concept. I think I could support slapstick opera wherever it might appear.

Special kudos must go to Meredith Arwady as the The Marquise of Berkenfeld. This is already my fourth encounter with Ms. Arwady, who I first heard as Gaea in Daphne at Santa Fe. She bills herself as a contralto, that rarest of operatic birds, nowadays rarer than countertenors. She was the other contralto in Il Trittico earlier this season. She was also Pasqualita in the Met simulcast of Doctor Atomic. Her voice sounds like a pleasingly feminine foghorn, and her comic acting for Daughter was outstanding. She ad libbed a bit of "Mon coeur s'ouvre à ta voix" that left me wanting more.

Diana Damrau isn't French, but neither is anyone else in the cast, so there was a consistent mangling of French across the cast. Juan Diego Florez was adorable as Tonio and hit all 9 of his Cs.

My favorite bit in this production is when Marie in exile pulls out her souvenirs from the regimental days and produces a sprouted potato. Love it. Love the opera done this way.
Posted by Dr.B at 12:57 PM