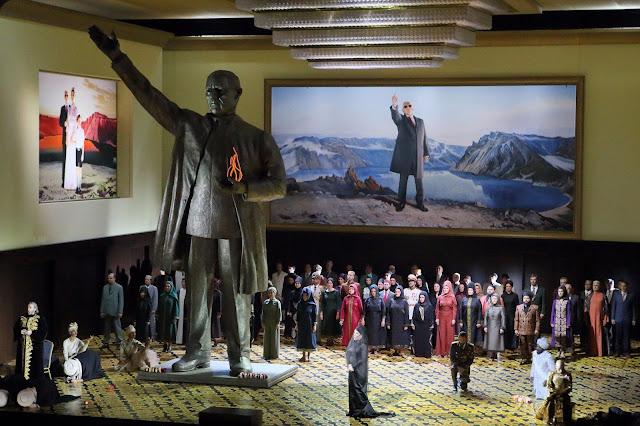 I experienced a lot of technical difficulties with this stream from the Bayerische Staatsoper and finally ended up listening on my iPhone, not an ideal medium for watching an opera.

The cast for this opera was simply spectacular.  DiDonato and Barcellona sing beautifully together.  It is one of the great bel canto operas with an endless stream of gorgeous music.  It may well be considered Rossini's masterpiece.

As with most of the streams from the Bayerische Staatsoper, this performance will probably disappear forever.  This makes me sad.

__________________________________
P.S.
Due to extreme technical difficulties, when I watched the stream of Semiramide from Munich live, I was reduced to watching it on my iPhone.  Today all is well.  Many people must have complained, so the Bayerische Staatsoper agreed to an on demand stream today.

This opera is a landmark from many perspectives.  It is the last opera composed for Isabella Colbran.  It is the last of Rossini's Italian operas.  After this, written in 1823, he moved to Paris and composed in the French style.  And finally and most significantly, it is the last Neapolitan Opera, a style which began with Alessandro Scarlatti over a century before.  In this style music dominates all other considerations.  Semiramide is Rossini's masterpiece.  The music is simply magnificent.

I get to see it this time.  There don't appear to be titles, but I don't seem to mind.  My previous experiences with this opera involved Montserrat Caballé and Marilyn Horne.  The first time was live in San Francisco where everyone dressed like playing cards and stood around.  The second time is on a DVD where the women all wear blond fright wigs.  No attempt was made either time to clarify the story.  We were there for the singing.

This performance from Munich should probably be considered regie.  Though originally in Babylon, it is moved to modern dress and placed visually in the modern middle east.  Men in white turbans should logically be Sikhs who are from India.  It's best not to think about it too much.  We are only confused by the golden woman with the bald head, the woman Arsace is in love with.  This does not remind us of anything middle eastern.

I am relieved to find that when Semiramide falls in love with Arsace, she does not know that he is her son by the husband she helped murder.

This production makes a serious attempt to deliver a coherent plot.

The color of Joyce DiDonato's voice is very different from that of Montserrat Caballé.  This difference doesn't make the music less beautiful, but it does make it more intense and dramatic.  The Met casting next season will not show this change.  Nor will the production be this interesting.

Arsace receives a letter from his father, and as in all operas reads it aloud.  Daniela Barcellona is Italian and has much less than the usual difficulty.  I am loving her Arsace.  I wonder where this convention came from.

Thank you, Bayerische Staatsoper.
Posted by Dr.B at 12:53 PM

Actually, Parterre Box is reporting that "Semiramide" will be web-available on demand this coming weekend, so perhaps the technical challenges you experienced before will have been solved.

BTW, my wife and I just returned from two weeks overseas -- Moscow, St. Petersburg and Prague. We saw a production of "Pagliacci" at the Michailovsky Theatre in St. Petersburg, which was extremely well sung but had three "quirks" I've never encountered with that opera. First, it was a single-bill performance with nothing paired to it. Second, it had a 20-minute intermission right after "Vesta la giubba," which I thought entirely unnecessary. Third, the prologue was sung by some baritone who was NOT Tonio, just some guy in costume who never appeared again until the final bows. Lovely little theater -- no obvious fire exits, though. Things are truly different in Russia.

I watched it again today and revised. I've never been to Russia. Should I go?