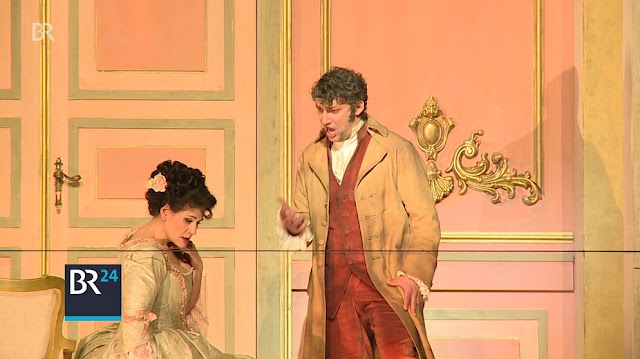 They layered every nuance for us to see at the Bayerische Staatsoper for Giordano's Andrea Chénier.  Above is how we generally viewed the sets.  Below is closer to what the audience saw. 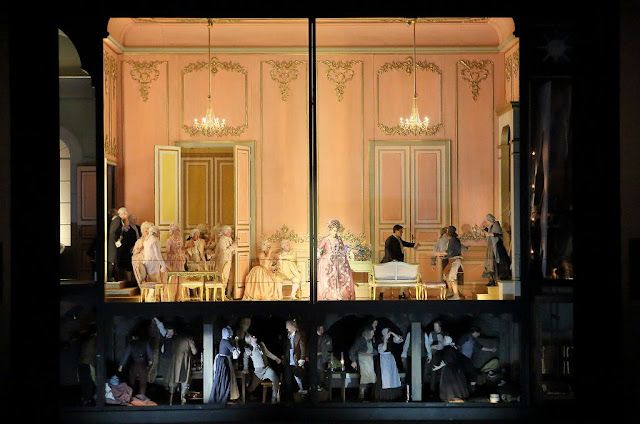 The production made frequent use of split  pictures.  In the opening party scene we see the household staff laboring below stairs while the party goes on upstairs.  When the revolutionaries arrive, we see people from the below stairs staff among them.  When Andrea and Maddalena are preparing to die, we see the guillotine just above them.  The last thing shown is the blade falling.  In the task of explaining the action this production was excellent.

This is a play about patriotism and class resentment.  It started to sound familiar.  The central character is actually Carlo Gérard who tries to stand on both sides of the conflict.  He is for the revolution and overthrowing the aristocracy, but he also loves the family he served.  He is the truly honorable but conflicted man.  Each speaks of how he loves his country.

The artistry of the performers set fire to this opera.  It is an opera about one of the most violent periods in western history.  But somehow before today it has never had a sufficient effect. From "La mamma morta" to "Vicino a te" it blazed to ever more emotional intensity.  Opera should set fire to your heart, and this one did.  Bravi.