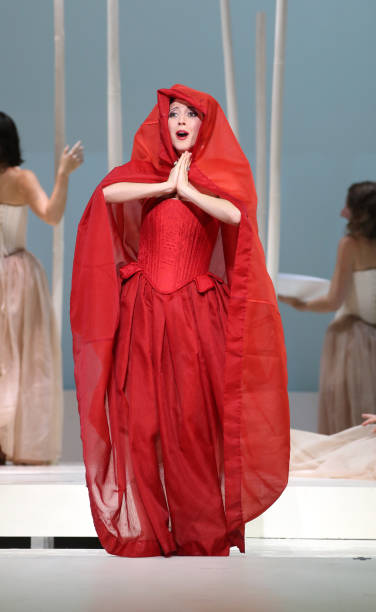 From Paris Opera Bastille I have found a film of Meyerbeer's Les Huguenots, 1836, which I wanted to watch live on Thursday.  The action takes place in 2063[?] according to a text on the screen.  The Catholic men wear clown-like ruffs around their necks while the protestants look a bit more like business men.

In Roberto Devereux we heard "God Save the Queen" in the overture.  In this opera the well known tune incorporated into the story is Luther's "Ein feste Burg."  This is to represent Protestantism.  Les Huguenots precedes Roberto Devereux.  We know that Meyerbeer was Wagner's patron and got him his start in composing operas, which might help to explain the presence of the Dresden Amen in Tannhäuser and Parsifal.  In spite of his rants against Meyerbeer, imitation is still the sincerest form of flattery.  Perhaps it serves to suggest an aura of religious feeling.  I digress.

I'm finding the production pretty hard going.  I have no background with this opera.  I am here to see Lisette Oropesa, and here at the mid point I must say she is magnificent.  The first scene is men and the second is women, with the queen's page going back and forth between them.  What is one to make of religious persecution in the future?  The set in Act II is very beautiful and includes a bit of nudity.

I am exploring this opera and am surprised to see a male chorus singing "Rata plan"  See also Donizetti's La fille du régiment, and Verdi's La Forza del Destino.  Again, this opera  appears to be the first.  I didn't realize how much borrowing went on.  There's a lot of choral work which I am finding unattractive.  Verdi bombast is somehow more fun.  Things going on in my soul are also interfering with my enjoyment of this opera.  I am tired of hatred and violence.

There is a line across Europe across the Alps dividing the descendants of  Roman culture and the descendants of Vikings, Germans, etc.  The former group remained catholic while all of the north, except maybe Poland, changed to protestant.  I have always felt that when Luther went to Rome, he was mostly experiencing culture shock.  However, in the Catholic countries were also pockets of Protestantism.  There were two results:  war and immigration to America.  My German friends would always ask why we had so many religions in America.  Because when you chased them out of Europe, they came to us.  Again I digress.

Yosep Kang has a very beautiful tenor voice but fluffs a high note later on.  As a lyric tenor he's wonderful.  As a dramatic tenor not so much.  Ermonela Jaho hasn't had much to sing in the first half but sings a lot in the later acts. Jaho is well known in Europe but has not really crossed my path that much.  All the big coloratura show pieces are for the queen while Valentine is a full lyric type with very little coloratura.    That seems to be the pattern with Meyerbeer.  All the coloratura arias are for a specific voice.  I admit to not being wild about any of these operas.

The greatest influences on Wagner seem to be Meyerbeer and Liszt, Meyerbeer for the heavy orchestration and dramatic style, Liszt for the invention of the tone poem which provides the through-composed concept applied to the full act of an opera.  I have to say I very much prefer mythology to politics for opera plots.  The only hit tune from this opera, other than the borrowed one, is the page's aria in act I.
Posted by Dr.B at 12:03 AM

And now I read that Lisette Oropesa will soon make her debut at La Scala.

This opera, one of my favorites (although, yes, I agree with your assessment of some of its shortcomings), also served as Joan Sutherland's "farewell performance to opera," as it is touted on the DVD of this production, which is by Opera Australia. Bet you can't guess who conducts!

This is a joke question surely. Did he get work after she retired?

I am pleased to read that others enjoyed Lisette's performance here as much as I did.