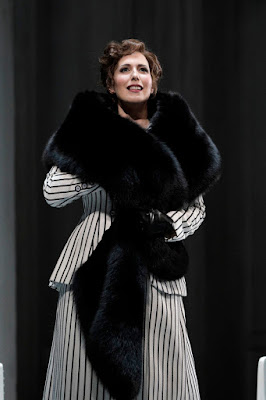 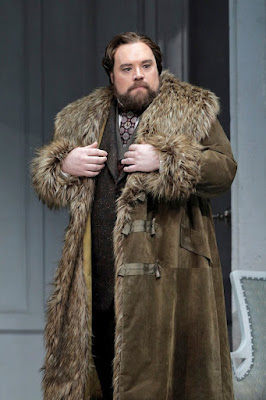 A new production of Strauss's Arabella is currently running at the San Francisco Opera.  This opera is very nice, has lovely music and a perfect ending, as long as you remember that everyone in it is an idiot.  The Waldners have two daughters and no money because papa gambles it all away.  They are trying very hard to find a wealthy and suitable husband for their elder daughter Arabella.  Father remembers his old army buddy Mandryka and sends him a picture of his daughter.

Younger daughter Zdenka goes around in male clothing and calls herself Zdenko because she likes to and because it's less expensive for her parents.  She is "best friends" with a young officer Matteo who sends flowers every day to Arabella.  Zdenko is constantly showing up with love letters supposedly from Arabella.  She rants at older sister about what a great husband Matteo would make.  Meanwhile Arabella is obviously completely uninterested in Matteo.  Many of these people know, including the fortune teller, that Zdenko is really Zdenka, but not a single one ever goes, "Oh. She likes him."  This is such a Duh conclusion that it makes the opera annoying.  All are thinking only of themselves. At the start Heidi looks very masculine in her disguise, but this gradually wears off.

Did I like the production?  It's very gray, too gray.  Yes, they're poor, but they're not really that poor.  Vienna isn't that drab.  Nevertheless, it almost works. It suggests an institutional space.

Did I like the conductor?  He is another of our auditioners for the position of musical director.  His Strauss was better, I thought, than most of the conductors at the Strauss Festival in Berlin.  It felt rhythmically interesting and flowing.  I have the usual complaint that the orchestra was often too loud for the singers.  Ellie warmed into her role slowly and you should have followed her.

Arabella is Queen of the Ball for the last day of Fasching (carnival).  Three counts follow her around and give her presents,  Then the nephew of Father's old friend--old friend has died--shows up to court Arabella.  They fall quickly in love.  Zdenka lures Matteo up to Arabella's room while Arabella is busy dancing.  Zdenka and Matteo make love.  Then we have identity confusion and anger, threats of duels and Zdenka in her night gown no longer looking the least masculine.

Hoffmannsthal died during the creation of this opera which might have worked better with a full libretto by him.  Success depends on beautiful music, which we achieved, and magical romance which did not quite happen.  We should be happy when the music is so good.