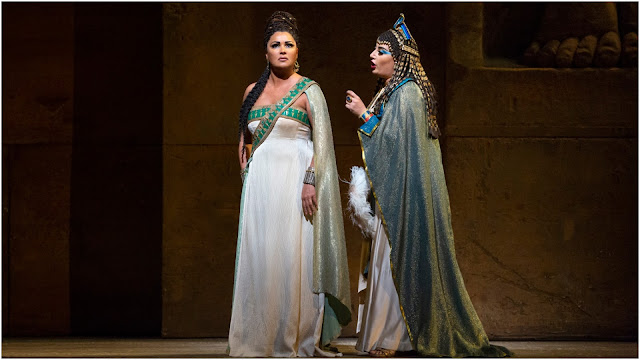 Today was the simulcast of Verdi's Aida from the Metropolitan Opera starring Anna Netrebko and Anita Rachvelishvili.  This performance series was the first time these two great ladies had sung together.  They were perfection together and brought us a new Aida in spite of the same old production we have been seeing since 1988.  The scene with the two women together was the best I've ever seen.  Anna Netrebko brings an intensity to the role of Aida that exceeds all. Anita was much more a woman in love than the usual revengeful bitch.  These two ladies will sing together again in Adriana Lecouvreur later this season.

The film director has a lot of influence over the impression made by an HD broadcast.  In this case the emphasis was on the two women in love with Radamès.  Camera shots were often chosen for intimacy rather than pomp and melodrama.

Quinn Kelsey was beautiful as the Ethiopian King.  The only disappointment was in the Radamès of Aleksandrs Antonenko.  I heard so much grousing about him that I expected him to be rather more horrible than actually turned out to be the case.  However, it is still true that Anna deserved better.  I remember when Pavarotti made his debut in the role in San Francisco years ago, that there was a lot of grousing then, too.  I often wonder about the modern state of opera singer training.  He could benefit from better physical conditioning.

Nicola Luisotti was his usual wonderful self.  I found that the shift of emphasis off of war and on to romance found in this performance made for a very pleasurable Aida experience.

Eighty-plus seats sold in the Denver-area theater I attended, with others in the metro area also reporting record-sold tickets. This is good news, although as one a younger attendee (one of the very few) said to me: "Most of the people here are between 80 and death."

You're correct that these performances (absent Antonenko, who needs some serious vocal coaching help) helped to liberate what is a fairly old production. I saw it live in NYC about 10 years ago, and the Act II triumphal scene never fails to overwhelm (although I'm glad they finally ditched the wagon-load of "dead" Ethiopians).