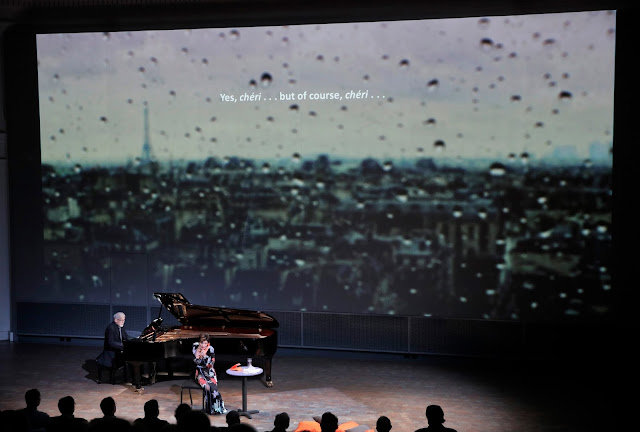 Anna Caterina Antonacci and her accompanist Donald Sulzen presented a program of French vocal music at the Taube Atrium Theater in the Veterans Building.  The first half of the program was a selection of French songs done in the traditional recital way with the addition of projected translations:

BERLIOZ: La mort d’Ophélie, Op. 18, No. 2
This is familiar to me from Cecilia Bartoli's recording.

These were all pleasing if not very exciting.  I think I liked best the Debussy.

After the intermission they performed the POULENC: La Voix humaine.   I would describe it as fully staged.  We can tell from the projection shown above that we are in Paris. 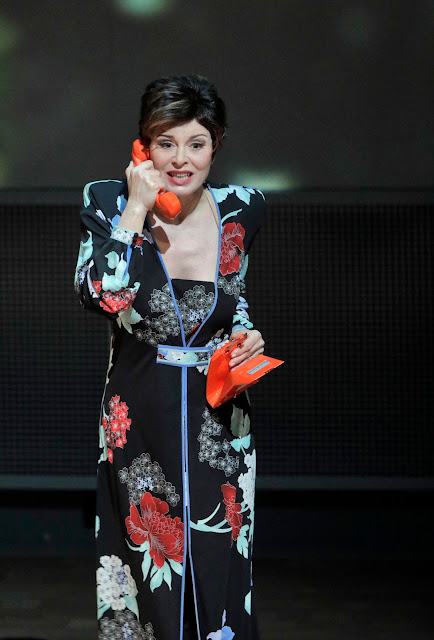 This opera is based on a play by Jean Cocteau.  The liner notes say that Ms Antonacci based her interpretation on a film starring Ingrid Bergman. This woman is complicated and desperate.  She begins with lies, pretends to have been away visiting a friend.  Then she admits that she has been to the hospital after attempting suicide.  The only thing hard to grasp is why he is calling her.

He is lying too, pretending to be at home when he is out at a club, probably with his new girl friend.  Anna Catarina is a wonderful singing actress.  Grazie mille. This was a marvelous tour de force.