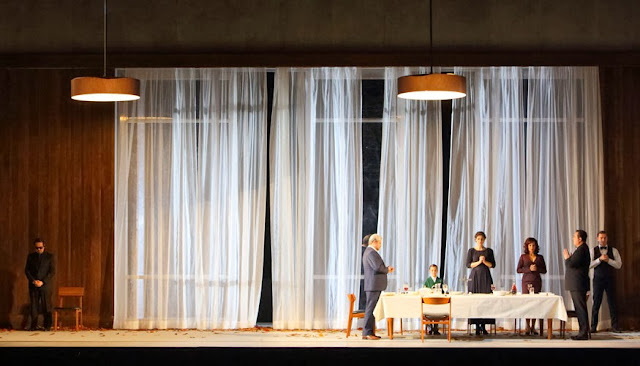 I'm having trouble deciding how to approach this writing. I have some very specific memories of this opera that I would like to share. This was Leontyne Price's second opera--Aida and then Forza--so I saw it live with her at the San Francisco Opera and on tv from the Met as part of her farewell from staged opera performances.

Or should I talk about the table shown above?  This table shows up in almost every scene with different numbers of chairs surrounding it.  Each person is assigned a place even when they are not in their assigned chair.  We presume that the chair with its back to us is for Don Alvaro who shows up late.  The accidental shooting was well staged.  This is usually confusing for the audience.  In each scene there are different numbers of chairs around the table and different singers.  Papa and the Padre are the same singer.

In the next scene years later we see Don Carlo in his green sweater and glasses at first, and then he changes into military clothing.  This is so we can follow who this is in the rest of the opera.

The music is wonderful, but the opera is too long. You lose interest, or at least I do, when the soprano is missing for scene after scene.

Pride of place in the bows and most enthusiasm in the applause went to Anja Harteros.  Is it possible to explain her?  Her voice is not beautiful, but it's beautiful enough.  In most Verdi you are not really looking for beauty.  Maria Callas' voice was also not beautiful.  Nor is Sondra Radvanovsky's, Anja's only real rival today.  I prefer Anja.  For me she has more emotional range, draws me in to the scene more.

Kaufmann and Tézier are well matched.  I can't help it, I want the duets to be with the soprano.  She dies at the end with a pathetic lack of excitement.  I used to blame the lack of popularity of this opera on the opening scene, but now I think it's the whole thing.  It just doesn't work.

I was viewing from a Mac in Ohio, and the stream was very jerky.  I haven't had that problem at home.

P.S.  I didn't mind the production.