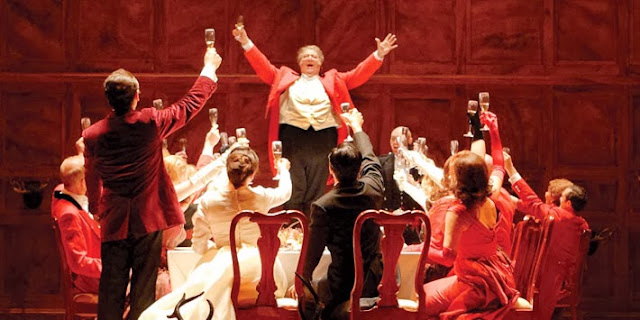 He is a giant man who does not require any padding to fully represent the magnificent Sir John Falstaff.  His voice precisely fits the role.  He can remain cheerful in the most horrendous of circumstances.  He is Italian and has the native Italian's regard for Verdi.   Ambrogio Maestri must surely have been born to play Falstaff.  It was simply a joy to watch and hear him. He also brought risotto which you can find the recipe for on the Met website.

However, we couldn't help reinterpreting the entire story from a much more Italian perspective.  We weren't alive in England in Shakespeare's time, but we were more able to imagine the English wanting to take revenge on mere flirting than we were able to imagine Italians from the 1950s wanting it.  Isn't this how an Italian man is expected to behave?  Would Italian women be surprised or shocked by it?  We think "yes" and "no" are the appropriate answers to these questions.

The Robert Carsen production for this Metropolitan Opera live in HD presentation moved the drama to the 1950s, we imagine because he could not resist the 50s clothing and kitchen styles.  Falstaff visits Alice in her kitchen to allow for far more than linens to throw around the stage.  (I bought this much more than I bought Ochs visiting Faninal in his kitchen here.)  Sir John is a gentleman, and it is thought that gentlemen last enjoyed their full privileges while the British Empire was still in tact.

I especially liked the opening scene.  Sir John is reading the morning paper while still in bed and still in his night clothes.  It is a large, significant bed, and round it are several small tables still covered with debris from last night's drunken party.  With this setting we require no help making our way through the dialogue of the opening scene.  All is clear as day.  They read the list of expenses, and we see immediately that these are for the party.

The only complaint is trivial--there was no oak tree in the final scene.

Stephanie Blythe sang "Reverenza" exactly as Marilyn Horne would have done, and then tells us that her first performance of the opera was as Marilyn Horne's understudy.  Era perfetto.

Of my three Falstaffs this year, this was definitely the best.  Everyone seemed to be having a wonderful time.