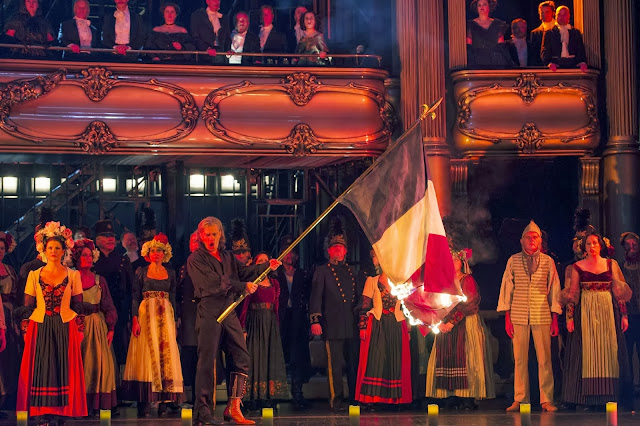 Now that the Met has had such success with simulcasts into theaters, everyone wants to do it.  The Tower Theater shows performances from the Royal Opera House in London, so I went down to catch Verdi's Les Vêpres siciliennes.

This is a grand opera in French, one of Verdi's earliest ventures into the world of French opera.  I kept listening to hear Verdi and really did not.  It seems he was very much trying to sound French.  There is a coloratura aria called Bolero near the end, the hit tune for this opera, but that was all I could hear of bel canto.

The setting has been moved from the historical event in 1282 to the 1850s period of Verdi's opera.  It is common to stage an opera in the style of the date of its premier instead of what it says in the libretto, and I felt it worked fine here.  The French and Italians seem to fight in almost every era.

The production seemed to try to crowd as much on to the stage as it could possibly hold.  There is the interior of the Paris Opera and the female part of the corps de ballet.  There's scenic shots of Sicily.  There's a very large chorus and a lot of supers.  If you like everything in motion, you would love this.  For instance, in the tenor and soprano love duet they constantly circle the chopping block, seeming to avoid instead of embrace each other.  The ballet dances the prologue and various other scenes throughout the opera, but the traditional long ballet in act 3 was omitted. There is politics.  France occupies Sicily, and the Sicilians make periodic attempts to throw them out.  Procida is the most anti-French, along with Hélène whose brother was killed.  She first enters holding her brother's head wrapped in a cloth.  The whole production is like that.  The governor rapes one of the dancers in the middle of the stage.  People are shot.   At the masked ball and other times, too, the masks are skulls held like lorgnettes.  It is a dense, complicated, dark and violent opera made more so by the production.  They spared us an actual massacre at the end.

I went to see Erwin Schrott in a dress.  It came near the end.  Why he wore a dress in this scene remains a mystery, but he looked great in it.  He also sang and acted very well.  Next in order of impressive performances came Bryan Hymel.  I think I was right about what I said about him here.  With a bit of extra polish he could be a very impressive singer.

The sound and picture quality at the Tower Theater in Sacramento were excellent.  This is my first time for the French version.  I saw the Italian version in San Francisco in 1993 with Carol Vaness and James Morris, and conducted by Charles Mackerras.
#ad