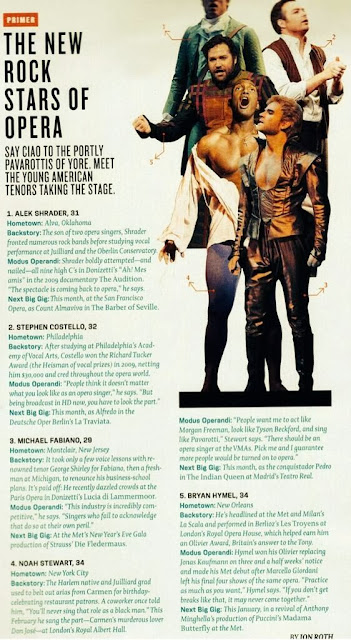 Noah Stewart points out this article in the November issue of Details magazine called Rock Stars of Opera. A short blurb appears for each of five young American tenors.  I am listing them in the order shown above.


I have seen Alek in Thomas Ades' The Tempest and in Rossini's Barber of Seville.  He is a lyric tenor with great flexibility.  In San Francisco he was sometimes difficult to hear, but this happens a lot for us.

I have seen Stephen in Moby Dick, at the Richard Tucker Gala with his wife, in Anna Bolena with Netrebko and in La Boheme in LA.  He is a lyric tenor of great sweetness.


Michael is the most spectacularly gifted of this group.  I have seen him as Cassio in Otello with Botha and in Lucrezia Borgia with Renée Fleming.  He is IMHO a spinto tenor with a bright, almost Pavarotti-like tone.  His phrasing is also mature and sophisticated.  For him the sky is the limit.

I know Noah primarily from the years when he trained at the San Francisco Opera.  He appeared there in the world premiere of Glass' Appomattox.  Then he was swept up into the Katherine Jenkins world in Great Brittain.  He works out and appears frequently in Hunks lists.  He recently won Operagasm's sexiest man award.  Right now he is in Madrid singing Purcell's The Indian Queen.  I think he needs to find his path.  All of them have commercial releases, but only Noah has his own album.

I have seen Bryan in Faust at Santa Fe and in Les Troyens in HD.  He also sang Les Troyens at the ROH with Pappano.  Les Troyens is a big chunk to bite off, and Bryan was outstanding.  I'm going out on a limb here, but if you are looking for the Domingo type tenor that can sing anything, Bryan may be your man.  In any event he is the heaviest voice of this group and needs to choose his repertoire with this fact in mind.  Maybe I need to hear him live more.

I have posted all of them before.  They are all in the part of their careers where they are trying to find their niche.