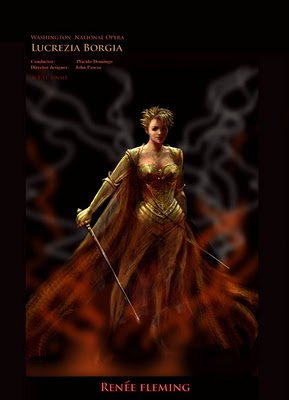 The plot of Donizetti's Lucrezia Borgia at the San Francisco Opera is a bit odd.  There are these two war buddies (remind you of anything?) who swear to live and die together--Orsini, a mezzo pants role, sung by Elizabeth DeShong, and Gennaro, the tenor, sung by Michael Fabiano.  One of them doesn't become a Moslem, but they do chase women and get drunk a lot.  There is more than a hint of homo-eroticism here.  Why else cast Orsini as a woman?

The other two principals are Duke Alfonso of Ferrara, sung by Vitalij Kowaljow, and his wife Lucrezia, sung by Renée Fleming.  There is no romance.  The first pair connects to the second pair because Lucrezia is Gennaro's mother.  This is a secret.  Lucrezia is the only one who knows.  The passion that develops between Gennaro and Lucrezia gives us more strong hints of forbidden sexuality, the basic plot of this opera.  It seems sexual to Lucrezia's husband, too, and he tries to get rid of Gennaro.

I liked the production and the singing very much.  There are supposed to be hit tunes in this opera.  Orsini gets a nice Brindisi in the third act, and Lucrezia's first act aria is supposed to be famous.  Neither was famous to me, philistine that I am, and this was my first viewing of the opera.

In the context of this opera Lucrezia is a complex role.  She gets to express motherly love, and then later she poisons all of her son's friends for insulting her.  Accidentally she poisons him, too.  Usually Renée's roles are about outfits, but this one is about hair.

Which brings us to Renée Fleming.  We've been hearing her a lot lately on the HD simulcasts, but I have recently begun to suspect that these broadcasts include body microphones.  I spotted them on Natalie Dessay and suspected them on Joyce DiDonato in Le Comte Ory when hers briefly phased out.  This is all a carefully maintained secret.

One of the reasons I fly around to see opera is because I am aware that you can't fully evaluate a voice without hearing it live in the house.  I heard Renée sing Daphne at Kennedy Center where she was occasionally difficult to hear.  But the acoustics at the Kennedy Center concert hall are ghastly, and the conductor made no effort to tone down the giant orchestra.

The acoustics at the War Memorial Opera House are only a bit better than Kennedy Center, but everything possible was done to make her performance work.  She was consistently blocked close to the front of the stage.  In the War Memorial this is as close to a hot spot as it gets.  Things drop off a lot as you begin to move up stage.

Our conductor Riccardo Frizza was very thoughtful in keeping the orchestra under control.  (For some unknown reason this opera sounds like Rigoletto to me.)

I love Renée Fleming.  Money was spent getting her here for this performance.  Anything I say is said with love.  The opening aria, a sweet song about Lucrezia's beautiful son, was excellent.  The style of her singing is always a joy.  But in the final aria her voice simply did not carry.

Dare I say it?  Someone should have considered a microphone.

It is important to note that I was not sitting in my normal seat.