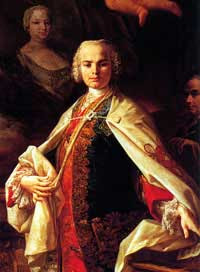 This was very much a Baroque weekend.  On Saturday night was Vivica Genaux with the Philharmonia Baroque in Berkeley doing her Arias for Farinelli program.

Philharmonia Baroque performs in the First Congregational Church in Berkeley, and after living in Sacramento for a while, I am feeling a bit of envy for such a spacious room with such nice acoustics.

This was sort of an anyone but Bach concert from the generation born from the decade 1678-88: