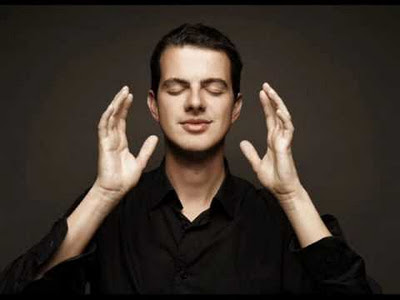 This is embarrassing.  In my youth we had only one countertenor--Alfred Deller--and he was strictly take it or leave it.  Now there are countertenors everywhere.  I've always hated them, both for the odd sound of their voices and for the fact that they were taking parts from my beloved mezzos.  So how should I confess that I really love Philippe Jaroussky?  It's so embarrassing.

He appeared at Hertz Hall in Berkeley on Sunday afternoon, the same time as the opening of Xerxes at War Memorial across the bay.  I've seen him before, though only from the back, at Salle Pleyel as Sesto in Giulio Cesare.

He shared the stage with a group called Apollo's Fire, conducted by Jeannette Sorrell.  There was an interesting story told between arias about Jaroussky and Sorrell exchanging letters of mutual admiration.  Apollo's Fire would be a difficult name to live up to. 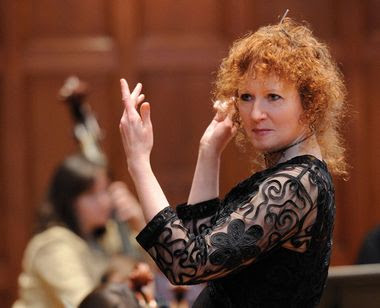 Apollo's Fire play standing.  Except for the cellos.  I don't know if you can play a cello standing.  The theorbo player also sits, but Ms Sorrell stands at the harpsichord.  When they stand, their bodies become involved in the emotion of the music.  This is some of the most passionate playing by a Baroque ensemble I have ever heard. 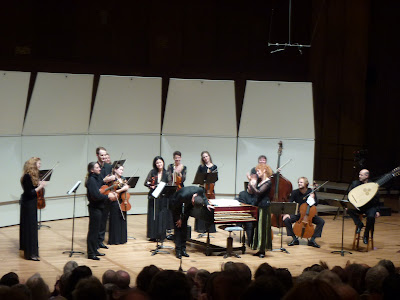 I added this picture because it's the only one I have that shows the theorbo player on the right end.  These are everywhere now.  In Baroque music theorbo is now as common as the harpsichord and cello for realizing the figured bass.

This is an Italian style ensemble with no winds.  Many of the instrumental numbers are arranged by Jeanette Sorrell, the conductor.  I am going to guess that this is due to the sketchy nature of the orchestration in the original scores.  It is hard to picture this, but the original purpose of the figured bass was much like a modern fake book, to provide a basis for extemporizing.  Not many can do this today.  Instead of carefully planned orchestration such as we have today, a piece might be played by whoever was available, and they would extemporize their parts.

The entire concert was Handel and Vivaldi, so the period of the music was basically identical to Saturday night's program, and similarly it alternated instrumental with vocal numbers.  The violinist Olivier Brault played a Vivaldi concerto and shared another Vivaldi concerto with Johanna Novom.  It was all very dynamic and exciting.

So why Philippe Jaroussky?  He sang Handel in the first half of the program, including an aria from Ariodante, and Vivaldi in the second half.  His voice is actually beautiful and shows a lovely vibrato, a rarity among countertenors.  And he phrases the dickens out of everything.  Both slow tempo and up tempo showpiece arias were wonderful.  He sang three encores including a final glorious "Ombra mai fu."

How can this be happening?  At the end we waved at each other.  In Berkeley this is the sign that the concert is over. 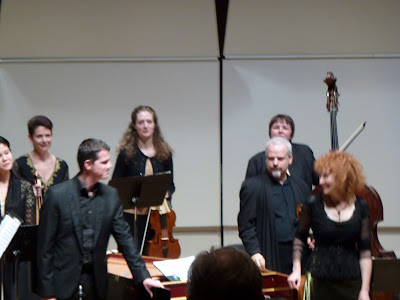 It's frankly impossible not to absolutely love Jaroussky with his tonality, clarity, diction ... he's rather sublime, whether you like counter-tenors or not. I've always had a liking for counter-tenors myself (another astounding one is Carlos Mena) with the great Scholl leading the way, but Jaroussky ... well, he's not really a counter-tenor as much as his very own category.