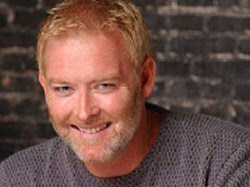 What you want and never get with your Siegfried (live from the Metropolitan Opera in HD) is a sexy Siegfried.  We have him in the sexy Heldentenor from Texas, Jay Hunter Morris. In her interview Deborah Voigt mentioned there was more electricity opposite Jay than the tenor he replaced. Those of us who have experienced the male teenager at home recognized him in Jay's portrayal of the 17 year old Siegfried.  All teenagers think they know everything, but this one actually might.

In his interview Morris mentioned that he no longer sang as loud as he could.  He gets through the very taxing role in fine form by allowing the natural ping in his voice to carry the day.  I loved it.  Jay, you need to hire a good photographer.  I have undoubtedly seen him in San Francisco, but I scour my memory without success.

I liked the log machine a lot more this time than I have in the previous two operas.  The technical gimmick of the forest bird was masterful.  A yellow bird appeared to flit around the stage from tree to tree while Mojca Erdmann sang off stage.  The projections grow ever more complicated. 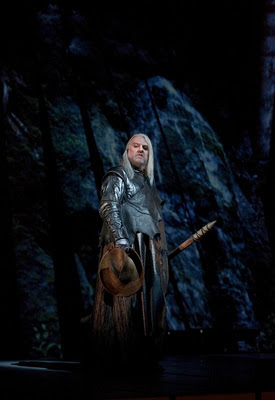 Another thing that I liked much more this time was Bryn Terfel's Wotan the Wanderer.  He seemed to handle the character better as someone who has tried everything and failed.  He is bitter and seems to be fully prepared for the ultimate humiliation when Siegfried breaks his spear.  He roles up his runes and leaves. 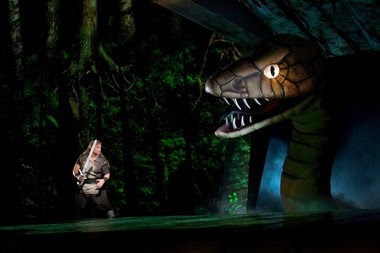 The dragon, shown above, is quite handsome. 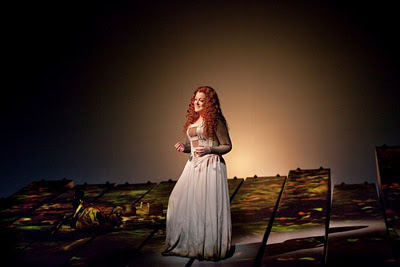 And here is Deborah Voigt in the final scene.  She tries to convince Siegfried to admire from a distance, but her heart just isn't in it.

Renée Fleming was her usual professional self in the interviews.  It was an excellent Siegfried.  I don't know if Levine would have been an improvement over Luisi.  Everyone seemed well coordinated and dynamic.

P.S.  It occurred to me after posting this that this installment in the Log Machine Ring included no wire walking.  Perhaps it has started to occur to the producers of this mess that scaring the wits out of your performers is not the path to great acting achievements.  Good riddance.