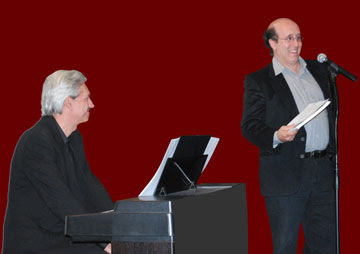 Michael Sokol, baritone, is a relatively recent addition to the faculty at California State University, Sacramento, and last night he gave a faculty recital with Richard Cionco at the piano.  I didn't know he existed when a friend suggested we check him out.  My apologies to Mr Cionco--the picture above shows a different pianist.  Also a different piano.  Also microphone.  Actually only the baritone is the same.

His program consisted of Schubert's Schwanengesang, a song cycle that is actually a pastiche published posthumously.  Maybe some of the songs were intended to be sung together, maybe not.  The subject matter is the usual thing for this period--unhappy love affairs.  It includes "Ständchen" (Serenade), one of Schubert's most famous Lieder.  The heaviest of the set is probably "Der Doppelgänger" (the lookalike).

An English translation was provided, but it didn't correspond at all to the clearly understandable German he was singing.  I asked him after if he spoke German, and when he said no, I congratulated him on some of the clearest German diction I had heard outside Germany.  It was very impressive.

The songs cover a very wide vocal range which he handled easily.  His voice is exactly the kind of bright baritone you would want for Lieder, and his expression was very nice, just right for Lieder.

Richard Cionco was an excellent, very musical accompanist.  Lieder recitals by Americans are seldom this good.