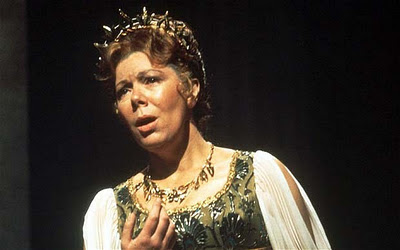 Gramophone Magazine has issued their Classical Music Awards for 2011, and among them is a Lifetime Achievement Award for Dame Janet Baker.  Nothing I am about to write should be misconstrued as a criticism of Dame Janet.

There are three things:  voice, technique and style.  Dame Janet is a British singer not only by birth but also by style.  There is a distinctly British style of singing with a quality of cleanness.  British singing is spare, relatively unslurred and unornamented, like a great British folk song.  In addition to her Britishness, Dame Janet also sang with a personal discursive style, rather like a magnificent British orator.  To achieve the truly personal is for me the highest praise of a performer.

In the Gramophone article they discuss how instantly identifiable her voice is.  And I insist--so is her style.  She is her fascinating creative self in all her repertoire.  My particular favorites are the Bach Matthew Passion and Mahler's Das Lied von der Erde.

The article goes on to say how clearly she observed the composer's wishes.  I propose that this is only possible if all the composers whom she has performed wished their music to sound British.

No offense.  They are British writers and have British ears.  The composer's wishes have nothing to do with it.

None of this is a criticism of the great Dame Janet who was a very great singer and well worthy of this honor.