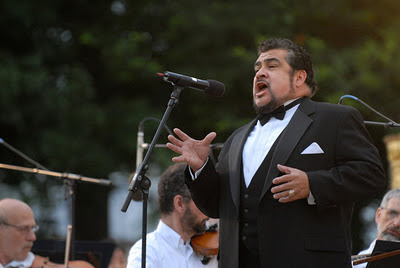 The Sacramento Opera succeeds best when it eschews subtlety.  Leoncavallo's I Pagliacci is a prime example of verismo, opera based in the rough lives of the lower classes.

I don't like the orchestra at the back of the stage with acting in front, but since the first half of the program was a concert by the Sacramento Philharmonic Orchestra, conducted by Michael Morgan, I suppose it was necessary.  For their portion the orchestra was imprecise, both in pitch and rhythm, and the music was spiritually bland.

The contrast with the opera could not have been greater.  The set effectively made the orchastra's presence hidden.  TV screens made the conductor visible to the actors.

It was crude and wild and spectacular.  Special kudos must go to the stage director, David Bartholomew.

The tenor who sang Canio, Eduardo Villa, was a last minute replacement, and he made the production.  Canio should be a middle aged man with a beautiful, too young wife, a scruffy Italian looking man with violent passions lurking just beneath the surface.  Then these violent passions must break forth.  Villa was all those things.  And he has just the right heavy, powerful dramatic tenor voice that kept all this passion well within his grasp.  It was a privilege to see him.