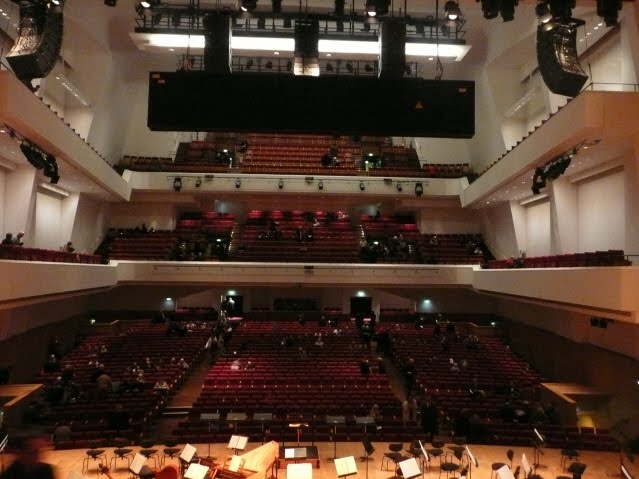 Interior of Salle Pleyel from my seat.
👍🏻
The performance of Giulio Cesare in Egitto at the Salle Pleyel in Paris has to be the greatest assemblage of countertenors ever: Andreas Scholl as Cesare, Philippe Jaroussky as Sesto, Christophe Dumaux as Tolomeo and Rachid Ben Abdesiam as Nerino. Scholl is German, but the other three seem to be trained in France. Who knew that France was a hotbed of countertenors?

Jaroussky is the star of the younger generation. Based on his performance here, I would say he is very exciting and has a pleasing color to his voice.

William Christie is a dynamic and exciting conductor who kept this insane, seemingly uncut presentation of the Handel opera moving as fast as imaginable. The pacing could not be criticized, but nevertheless the performance ran a half hour over the announced 4 hours. A seven o'clock start would have been nice.

I would have preferred to see and hear Cecilia from the front instead of the behind the orchestra seat I was given. I can still remember how it looked in the staging in Zurich. The whole concert was very enjoyable, very professionally done, especially the early instrument orchestra. Cecilia was especially beautiful in "piangero" and "da tempeste." 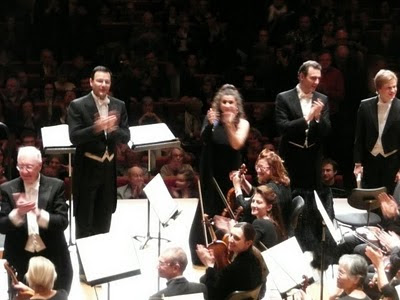 William Christie is left, then Scholl, then Cecilia Bartoli. I didn't notice at the concert, but the men all seem to be wearing white tie and tails. This is the only view I got of their faces. Now that I know to look for it, I see the blue ribbon below Cecilia's right hand.  This is the l'ordre du Mérite which she received at intermission.

Thanks for this - I really wanted to go to it but couldn't get a ticket. Did they just do it as a "straight" concert performance or was there any acting or interaction involved?

They all used scores on stands but moved and turned and gestured. Scholl in particular was very lively. Cleopatra embraced Caesar. One cute piece of business--where Tolomeo meets his end, the singer fell out of his chair onto the floor.