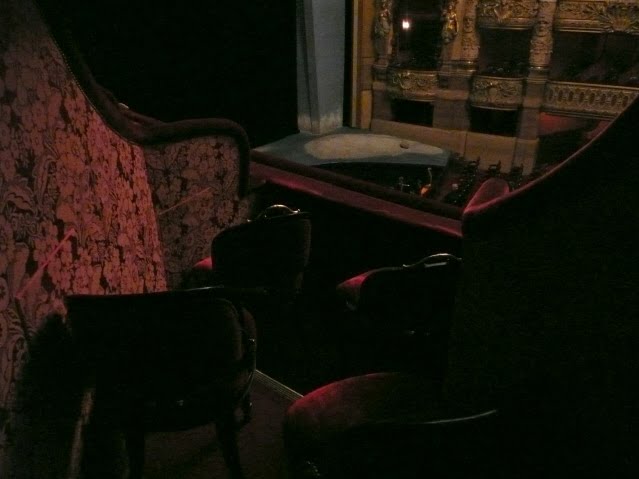 View of stage from my seat.


I bought a ticket for Idomeneo from a scalper at Opera Garnier. Second row of box 13. I went for Isabel Bayrakdarian who sang Ilia, and maybe Vesselina Kasarova as Idamante. In Paris Anna Netrebko has appeared in this production, though not now as the scalper claimed.

Kasarova is always the most manly person on the stage. Isabel rolls her Rs in a rather startling way.

Should I attempt an actual review? The production placed this opera in a modern Cretan fishing village on the shore of the Mediterranean with projections of waves at the back of the stage. I thought this worked.

Commentators always say Idomeneo is Mozart's best opera seria. Elektra is in it for some obscure reason--perhaps for the possibility of rage arias. After the thrill of Werther, it was pretty ho hum.

My seat mate spoke English so we talked about opera. I believe it was here that Berlioz sat in the orchestra pit with the orchestra to provide the material for Evenings in the Orchestra. I don't know if the dates are correct.

PS. Dates are not correct. It must have been another house.
Posted by Dr.B at 4:10 AM