I want to sing Elsa. 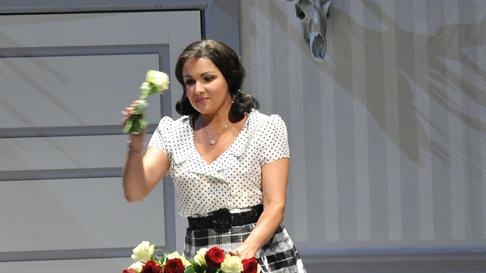 [This interview is translated from Opernwelt and is about 3 years old.]

Anna Netrebko prefers to look forward rather than backwards. Why does she sing in arenas and so gladly go to concerts, why is bel canto good for the voice, and how child and career go together, and what is the price of success, the soprano has revealed to Kai Luehrs-Kaiser.

Ms Netrebko, you are now a mother and living in Vienna. Could we talk in German?

Maybe better not (laughs). Languages are my weak point. I'm trying what I can. And on the new album, I have maybe almost exaggerated it. There are ten languages I sing there. In reality, languages are the hardest thing there is for me.

Why is it so difficult?

I do not keep the vocabulary. I am still desperately learning French, for example. Maybe I'm too lazy or not intelligent enough. My mother language I speak only with friends, and they are mainly in Russia. I live in New York, Vienna and St. Petersburg. Three wonderful cities. My new album is almost a reflection of the fact that I'm linguistically well basically easily uprooted.

The album is called "Souvenirs".  Do you like to look back?

The title is not about me. The idea was rather to tie together a bouquet of blossoms and flowers. Some may find they do not quite fit together. But they sound good together. The most difficult was the Andalusian song. My favorite is the Yiddish. I wanted something very old among them. With men's choir and guitar. I love the ornaments in this music. No, I do not look back, but I try to take pleasure in what is.

On stage you sing almost nothing of these?

Right. Six of the titles are even written for mezzo-soprano. Some are very dramatic and would have to be sung at a concert hall with a bigger voice than I can. I actually sing it softer and sweeter than one usually hears it. But you find that everything has to be sung on stage? I do not. At most on a small one.

The album marks where you hear operetta songs, a move to lighter repertoire?

No. The task was to bring the title in good order. I pleaded for the album to open with more spectacular titles. Then, I confess, there is a break. After that - with "Solveig's Song" from Grieg – comes something for the soul. Then something to wake up. Then it's over.

You are in German speaking countries today the best known and in this sense, one might say, the most important singer. How do you cope with it?

Thank you for the compliment. I hear, of course, that you think that's not quite so unproblematical, that it’s not easy. And it is not. I feel my popularity. I feel the sympathy that I receive from the public. That's one reason why I perform so often in huge concert arenas, the artist if it’s only about art, will not necessarily make the most fun. I understand that but - apart from the fact that I live it - as part of the responsibility that follows from my success. For me personally it was always the sole important thing to sing well. The rest comes afterwards. But it's true that sometimes this “rest” is a pretty big group that I must overcome.

Whom would you yourself describe as the most important singers in the world?

I think about it, but not often. But I adore and admire numerous singers and colleagues, whose success pleases me very much. Not only sopranos. Among the sopranos I find particularly amazing are Natalie Dessay and Diana Damrau, Renée Fleming and Angela Gheorghiu. Quite different singers who take nothing away from one another. I go passionately to their concerts - and afterwards regularly behind the stage to congratulate them. For example, recently in "Lucia di Lammermoor" with Natalie Dessay. I also share with them professionally. Natalie, for example, knows exactly what she does - and what is required of her artistically.

[Here appears that wonderful German word “Doch!” which translates to ‘On the contrary yes.” There is no English equivalent.] Now I also know. I am sometimes unhappy with the productions in which I sing. And will therefore become a bit difficult. You know, I have to do again and again with production revival directors who tell me to do as did my predicessors a decade ago in the same staging. However, I need nobody to tell me: "Kneel down, when you come to this place. Look up to heaven." These things I know even if they are necessary. However, I have no strong preference for overly traditional productions in which they too often must cast eyes to the sky. I do not need this.

What are the dangerous sides of fame?

There is a disturbing side of success, that's true. It is the price one must pay sometimes. What makes me sick, are mainly made-up interviews or quotes that contain some shocking details. For example, I would like to sing naked, or similar horrors. A significant burden of success also stems from a certain responsibility to be always better than you are. This is not so simple.

What do you mean?

We singers are live performers. So my service is subject to fluctuations, which depend on the daily constitution of biological things and also on coincidences.

I had during my pregnancy suddenly quite an iron deficiency. In the evening I was to sing in Vienna a performance: Bellini's "I Capuleti ei Montecchi." Ten minutes before the performance I had lost my voice. I did not go on. It was a nightmare. What to do? If I would have canceled the performance, there would have been a scandal. Then we effectively eliminated the need for some high notes. And I was announced as indisposed. Thank God I can sing a pretty good performance. But I was shaking like anything. Why am I telling you this? Because one price of my success consists of the fact that I may give no bad performances.

Your colleague Rolando Villazón has recently fallen into a vocal crisis and had to pause a few months. What effect has this had on you?

We are all in the same boat. Rolando is like many of us - and I also – an appearance hungry artist, who is pulled onto the stage. Add to this the constant demands, offers and enticements. For many singers of our generation, certain things, including interviews are just part of it. We do it because we believe that it must be. And then we don’t find the limit in order to protect ourselves. I must say that I've been through a corresponding crisis. It did not take quite as long. And it was with me above all psychological.

About four years ago. I could not cope with all the hype and was desperate. I was not clear how it would go. I did not become a singer to be famous. But to sing. It was awful to bring myself out from this crisis. It was as if someone had eaten too many sweets. I then completely withdrew for one month. And then cut drastically the number of my interviews. Initially there had been sometimes eight hours of interviews. I won’t do that anymore.

How do you perceive the public Anna Netrebko that jumps at you out of the tabloids?

As negative only if the reports are invented. I have to play a public role to some extent, in order to survive. I must appear as strong and determined, even if I go only to a party. And now I'm even happy at parties of friends. Immediately, I'm part of something, but I do not really want. Still does everything I say about myself, agree with me. I am also proud of this. I do not like to be fake.

Your child will change your career fundamentally?

Well, that's the big question in my mind, of course. What matters is that I want to be a good mother. I don’t want the child always trusted to a nanny. My child will be happy. But I have also spoken with colleagues about it who have the same problem that I think have overcome it well. Christine Schäfer for example, whom I also honor very much as a singer, has two children and has really gotten the hang of it. She told me: you have some difficult months, but then you can get it. I am confident and certainly determined to get it.

Can the birth of your son change your voice?

Even the pregnancy if you keep getting heavier, is not easy for the voice. But the voice remains. I've sung for a long while I was pregnant. That was not hard. My pregnant Juliette in Paris was, I believe, still quite good. True, there are bad stories about singers after the birth of a child. But I have my technique. And I think that if women have problems with the voice after the birth of their child, that this is actually due to a technical deficiency.

A few years ago when you dropped out of the recordings on your chosen Mozart album, you have described yourself as particularly a bel canto singer. Would you still look at it that way?

I still try it. Of course, the voice has developed. I sing, for example, more French repertoire. But bel canto is and remains simply the best for the vote. One expresses oneself better with it. Mozart is also good for the voice. But bel canto remains for me the measure and the basis of things.

How about the complete recordings of opera in the future?

No, I like that she wants to know everything. I myself am curious, and my curiosity has hurt me many times. But I have enough intuition to know behind which door a gaping chasm might be. Seriously, I like "Lohengrin" much better than for example "Meistersinger". Basically, I'm a Wagnerian. Pity that there are no more for me to sing.

Why have you settled in Austria and not, for example, in Switzerland?

But this is a provocative question! Switzerland is a great country, and the Swiss are a great audience. I had just the beginning of close ties to Austria. And I love being able to go to concerts in Vienna, not only of fellow singers. I am a very happy person when I'm at a concert. Also, I'm good friends with Valery Gergiev and Daniel Barenboim. I am a lover of classical music. Recently I was at "Rape of Lucretia" by Britten with Ian Bostridge. Fantastic!

Yes, since I heard many years ago "The Turn of the Screw." That made me really electrified. I love Britten. But I am also a big fan of Shostakovich. All composers, of which I unfortunately can not sing much.

Would you like some times to exchange your fame for the ability to be easily able to give only the music?

I don’t want to change anything in my life. Yes because I can concentrate entirely on music. When it concerns my role in the popular press, then I do not look at myself. My German is not sufficient to excite me over the contents.

And when you see pictures?

If I suddenly see pictures of me, I think most: "My God, I'm fat!" Besides, my celebrity tabloid status in other countries is not nearly as bad. In Britain, for example, I remain largely spared. Since they already have Amy Winehouse.
Posted by Dr.B at 5:49 PM