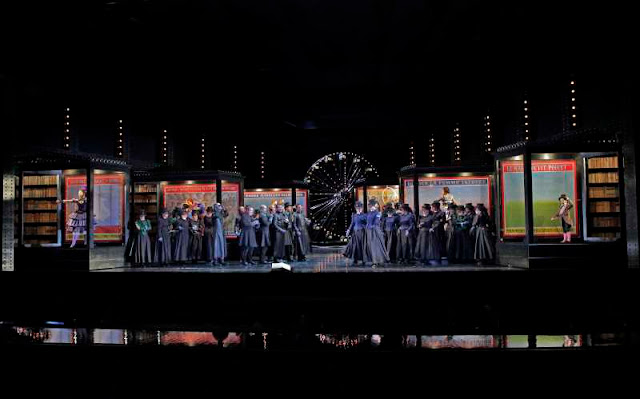 The band of color across the bottom of the picture is actually a reflection in the moat that runs around the edge of the orchestra pit.

Faust and I have a relationship since it was one of the operas we performed in Ulm.  Ours was neither as serious and sensible as last season's in San Francisco nor as silly as the one at the Santa Fe Opera.

Let's see.  Guys in pointy helmets is Kaiser Germany, right?  It's hard to guess the period for this production.  Men are in top hats, but Marguerite's dress does not reach the floor.  Does that make her a child?

Faust first appears in a wheelchair through the opening at the back of the stage where God's sunset was still in progress.  To turn him back into a young man the devil is reduced to performing surgery.  The fair where Faust meets Marguerite is staged as a carnival side show with a bearded lady, a fat man and a set of Siamese twins.  Marguerite makes her appearance on roller-skates.

The ballet is left in--a first for me--and staged as six opera divas, each attempting to seduce Faust.  It makes the opera too long.

One could go on and on listing the regie gimmicks.  I liked it that when the soldiers return in triumph, they are followed on stage by three caskets.  Serious and silly alternate in rapid order.

So how does this explain that it was a triumph?  It is one of the great mysteries, one that Shakespeare understood, that a little comedy only makes the tragedy that much deeper.

Our conductor, Frédéric Chaslin, the chief conductor of the Santa Fe Opera, is an actual Frenchman.  After my experience in Paris, I am convinced the French understand their opera in a way that mere foreigners cannot.  We were spared unrelenting heavy tempos and thick orchestral playing, and in its place was lightness and charm, a winning combination.

His singers were with him all the way, beginning with the wonderful Marguerite of American Ailyn Pérez who has already made her debut in Milan, Berlin and Vienna.  I look forward to seeing more of her.

Ours was the last performance for Bryan Hymel as Faust.  He's also already sung in Milan.  Faust appears to be on the heavy end of his repertoire.  Mark S. Doss was vocally a bit light but generally an outstanding Mephistopheles.

My tour mates are quibbling over the production, an irresistible pastime, but for me it was the singing, the poise of the singing actors, and most of all the magnificent music making that made this an excellent Faust. 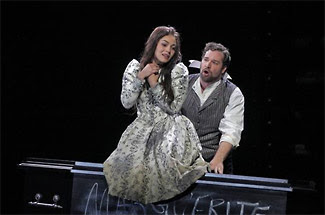 Hee. (That's a wry-wit-inspired chuckle, not a Schadenfreude chuckle.) Based on the details you give it sounds as though it could have been a non-anachronistic early-twentieth-century setting, choosing to emphasize Marguerite's youth/innocence through short dress and roller skates?

I'm glad to hear such good things of the musical quality of the performance. I also look forward to hearing Ailyn Perez myself. I have yet to have a serious Auseinandersetzung with the work myself, but I don't want to miss any of the Met casts, so Faust awaits. I'd be more than glad for any of your insights/opinions on the work.

Have fun with the rest of the Santa Fe visit!