The set and its use in the drama was spectacularly serviceable on the tiny stage.  Panels came out quickly and smoothly from the side to create the different scenes with no pause in the action.  There are scenes in Wozzeck where large crowds are on stage, people dancing, bands that play on stage, almost mob scenes, and they manage it all quite gracefully.  They have their shit rather astoundingly together here.

Wozzeck is about a soldier of the rank and file.  He shaves his commanding officer every morning.  He gathers sticks in the field.  He supports his common-law wife and their child and supplements his income by allowing himself to be the subject of medical experiments.  In his particular experiment he is allowed to eat nothing but beans.  The production implied that he might also be injected with drugs.

As a result Wozzeck talks crazy.  For instance, he imagines he is pursued by Free Masons (Freimauern).

This is my third Wozzeck--once in the 60's with Marilyn Horne, once in the 80's with Janis Martin and now with Nicola Beller Carbone, a German soprano.  I was most interested in the differences in style of these three women.  Marilyn Horne could have been singing Bellini.  Janis Martin could have been doing Wagner.  Nicola Beller Carbone was doing Berg--a rather choppy modern Berg. 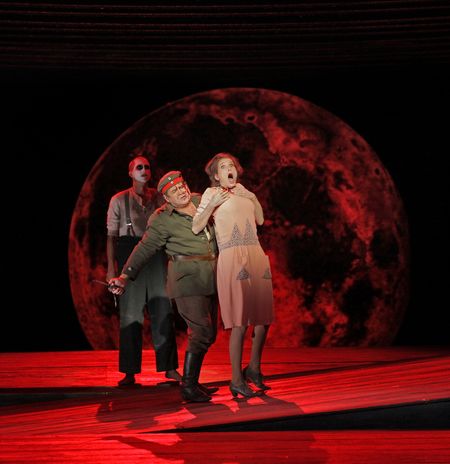 Wozzeck is in the full Second Viennese School style, including extensive Sprechstimme.  Wozzeck is particularly complex with all conceivable levels between talking and singing.  Richard Paul Fink was wonderfully grim and insane, altogether an outstanding Wozzeck.

There were two big men in the production--Eric Owens as the doctor and Stuart Skelton as the drum major--looming over the tiny stage.  Owens rides a bicycle right up to the edge of the pit.  It made me wonder if the orchestra gets hazard pay.  Skelton was a marvelous asshole, but he needs to see that he doesn't become typecast.

As the years go by the music sounds less and less harsh.  Now I hear the enormous variety of colors that Berg achieves with his large orchestra.  By now music in the movies has made modern music sound familiar.  Berg feels an old friend, a fascinating, very emotional old friend.

This is by far the most I have enjoyed Wozzeck.
Posted by Dr.B at 12:00 PM

In our class on Wozzeck we were briefly introduced to the concept of the tone row, an invention of Arnold Schoenberg. However, Wozzeck was composed between 1914 and 1922, while the tone row was not introduced until 1921. Wozzeck is atonal but not twelve tone. In case you were curious.