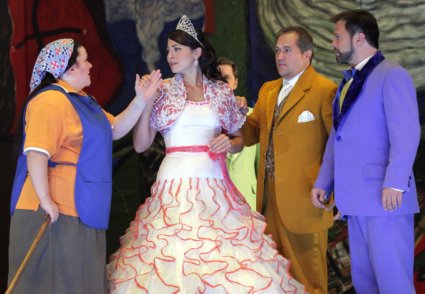 Every year the Santa Fe Opera does one new or neglected opera, and this year it is Vivaldi's Griselda.  Obviously, 1735 isn't new, so that leaves neglected.

The plot is not politically correct.  King Gualtiero divorces his wife Griselda and threatens to marry someone else for the sole purpose of improving his political standing.  Peter Sellars, the production designer, changed the ending.  In the original there is a kind of double wedding where mother Griselda and Daughter Costanza get together with their respective men.  Instead the King announces simply that all is forgiven, you're still queen, and Griselda just goes on sweeping the floor like it's all too much for her.  Perhaps this helps our modern sensitivities, but it does not save this cruel, anachronistic plot. 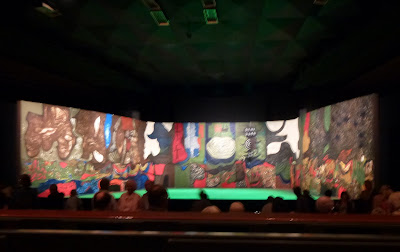 I've seen stagings of Baroque operas I liked more--I was quite fond of Rinaldo in Zurich--but I don't really know if any staging could save Griselda.  Gronk painted the set.  Everything looks like modern northern New Mexico.  Do we care one way or the other?  Not really.

Because it's really all about the singing.  And gorgeous singing it was, too.

David Daniels as Roberto is probably the biggest name, and he sang very well, but for me I can't get past the countertenor thing.  Sorry.

Tenor Paul Groves as King Gualtiero, the lowest voice on the stage, was excellent.  My previous reservations about his singing--pushed down tone--were nowhere in evidence.  His coloratura is smooth and natural for such a dark voice.

You could not do this opera without contralto Meredith Arwady as Griselda.  The role was written for Vivaldi's girl friend who, everyone keeps telling us, was a terrible singer.  I was happy to see Meredith take a dip into the Baroque but hope for something more congenial next time.  She was the emotional heart of this otherwise heartless opera. 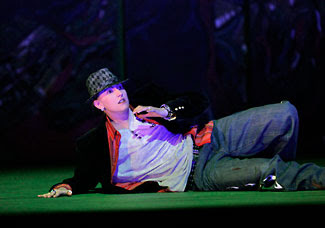 I enjoyed Amanda Majeski as Ottone, Griselda's other suiter.  This character was translated into a highschool kid with jeans and sneakers and a gun.

The unqualified star of the evening was the incredible, spectacular, gorgeous Isabel Leonard, a mezzo in the role of Costanza.  There were rumors of a shoving match for attention between Paul and David, a seemingly pointless activity, since it was clearly Isabel who stole the show.  Hers were the best arias and she aced every single one of them, including the famous "Agitata da due venti," the hit tune for this opera.

Griselda is saved by singing.