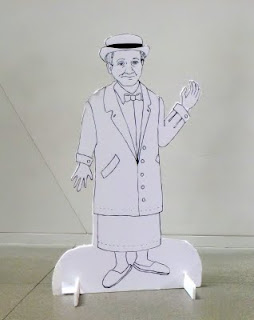 Of course, there are at least four acts and many more than four saints.  You knew that.  As a former GS freak who has actually read a substantial percentage of her literary works, it feels like the rest of the world is finally catching up.  To keep the record straight, this is my first Four Saints.

I have taken down my copy of Last Operas and Plays to see how the text looks on the page.  Most of Stein's plays look like normal plays--on the left is the character's name and on the right is the words he is to speak.  This is the form for The Mother of Us All, the other opera with text by Stein and music by Virgil Thomson.  Not Four Saints.  Her desire to write a play or maybe an opera is only half-hearted.  She just writes down anything--Stein notoriously never edited herself--including a lot of words that look like stage directions, and Thomson composes everything and assigns who will sing what. A few words about Virgil Thomson. From the perspective of 2011 he is clearly the original minimalist. The program speaks of his influence on Philip Glass. Deliberate, self-conscious simplicity is minimalism. Why have I never seen this before?

And in Stein's text we have minimalist poetry. Why invent new text when we could simply keep repeating the old text? Perhaps this text is just thoughts about possibly thinking about possibly writing a play. 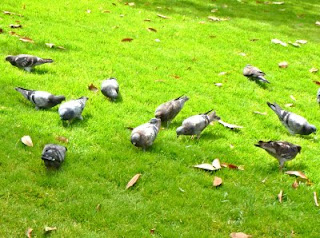 "Pigeons on the grass alas." Crossing Yerba Buena Gardens on the way to the performance, I saw these pigeons.

At the start of the "installation" someone came out and tried to explain what we were about to see.  Apparently at some date after the original 1934 production, Virgil Thomson created a cut down version of the opera.  Then along came Ensemble Parallèle and SFMOMA, and they requested Luciano Chessa to compose something more 21st century for these cut out bits of text. The result is a short prelude opera called A Heavenly Act. The characters here are also Saint Ignatius and Saints Teresa I and II.

This new work can't decide what it is musically. There is something resembling ensemble Sprechstimme, a kind of randomized whispering. There is an extended rap song, complete with microphone. There's a long, almost tonal waltz. There's a beautiful duet with Teresa I and Teresa II. Often it's almost tonal with intrusive percussion and a meandering synthesizer (harmonium) to throw you off.

You can tell I'm enjoying trying to explain this, even if I don't really succeed.

When a crowd appears on stage in colorful outfits, we know we are now doing Virgil Thomson. All is sunshine and light.

A plot is imposed on the text to great effect. Saint Ignatius operates on Saint Teresa--that would be Saint Teresa I--and apparently the results are not good, because two policemen appear and arrest him. He goes on trial for murder, is convicted and executed in the electric chair. While the cast sings about pigeons.  All the saints appear to be electrocuted together.  "When this you see remember me."

The able conductor is Nicole Paiement. Wendy Hillhouse, John Bischoff, Heidi Moss (Teresa I), Krisen Choi (Teresa II) and Eugene Brancoveanu (Saint Ignatius) were the most important singers. Everyone involved is from the Bay Area.

It was a work of love.