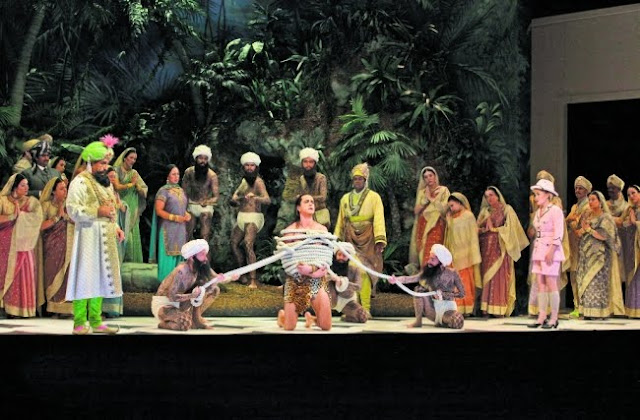 The Santa Fe Opera's production of Menotti's The Last Savage leaves behind a series of images.

The most powerful image is the troop of skinny men in their turbans, long black beards, Ghandi loin cloths and pervasive tattoos who strut around the stage with their toes pointing out.  They told us we were in a comedy.  This in turn led to speculation:  how could you possibly tattoo that many men?  Body suits?  There was no evidence of wrinkling.  Stenciling?  Maybe.  Fake tattoos?  Maybe.  Mysteries are very attractive.

Then there is the unforgettable image of the heroine Kitty in her pink safari suit, complete with pink kepi.  She is sung by the dainty and adorable coloratura soprano Anna Christy.  I didn't expect so much coloratura from Menotti.  Anna was surely perfectly cast, very much like a character from Legally Blonde. 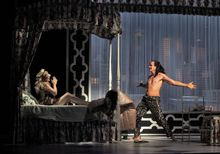 Then there is the image of the savage himself who started out in a loin cloth and huge ugly turban.  Daniel Okulitch, a Canadian baritone who looks marvelous in all possible stages of dress and undress, is also a fine lyric baritone.  I almost said we could hope to see more of him, but how could we possibly, if you know what I mean?

We wander from India to Chicago and back.  Menotti wrote his own libretti, and his skill can best be seen in the party for Chicago society.  The savage meets a cross section of religious figures, artists, debutantes, scientists, etc.  There is even a brief bit of modern sounding chamber music, which is supposed to be the only part Stravinsky liked.

Hearing Menotti from the view of the 21st century, I realize it is in the style of the classic American musical and could easily play on Broadway--particularly in this production.

Our schedule of the five operas was in exactly the right order, especially Faust at the beginning and Savage at the end.  We wondered why Marguerite climbed into the stand of organ pipes on her way to heaven.  The answer came when the savage attempts to escape civilization by climbing into the panorama of Chicago skyscrapers at the back.  We have achieved symmetry.

Wow! The Last Savage is brilliant. I heard many great reviews about it! I hope I can watched it live someday!