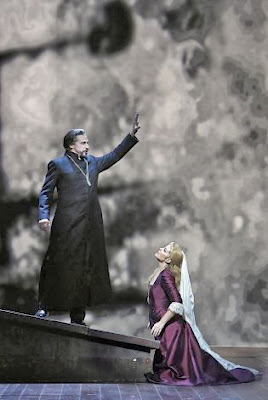 On Halloween I saw Richard Wagner's Der fliegende Holländer. According to Not for Fun Only, "The director Petrika Ionesco was fired by David Gockley the previous week [before the opening,] the production hastily re-staged. The rumored laser beams, spaceships & alien zombies were nowhere to be seen"  Zombies would have been cute for Halloween, but we had only dead bodies.  People are complaining about the projections.  For me projections in opera stand in the place of special effects in movies.  You may not like them, but they're here to stay.  Gray waves were for the living, and red ones were for the Dutchman and his dead crew.  Features of the remaining production seemed to be borrowed from Falstaff.

I was shocked to hear how old fashioned the score sounded.  Now that I listen to opera all the time I hear more than ever before. It reminded me of Der Wildschütz by Lorzing written only 1 year earlier.  This is undoubtedly the most performed opera of this genre.

If I am to be a normal reviewer, I must decide:  it was terrible/wonderful and then explain why.  I never seen to manage that.  I don't care how great they are, but I can't really tolerate an extended duet between two basses such as comes at the end of Act I.  Once this was over, I enjoyed all the rest.  The chorus was marvelous, as usual, both on the stage and roaring at us from somewhere in the balcony.  We attributed their bad dancing to the fact that they were supposed to be drunk.

The plot here is rather horrible.  Daland is supposed to be watching out for his daughter's welfare but cares only for the Dutchman's money.  Senta realizes that the only way she can be sure she will be faithful until death is to die now.  She leaps to her death suddenly, rather out of the blue, here in a manner much like Tosca.  I couldn't tell if this leap would make the right effect from the orchestra, but from the balcony Senta's leap off the back of the stage worked well.

Greer Grimsley and Lise Lindstrom were pleasing both to see and hear.  They have intense, cutting voices, more or less in a category with Hotter, Callas and Radvanovsky.  I understand that Lise is from San Francisco and yet is making her company debut.  It worked for me.

P.S. People complained that the tempos were fast. There are two parts to this complaint. 1. Were the tempos fast? I would have to say yes. 2. Is that something to complain about? It kept the pace moving. I felt the opera went by pretty quickly.
Posted by Dr.B at 9:28 PM