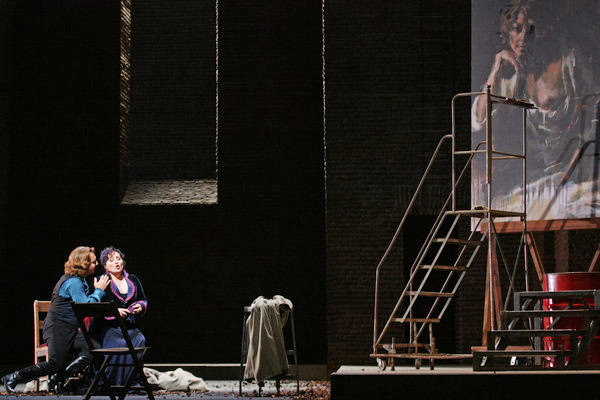 
Saturday was Tosca live from the Metropolitan Opera.  The Met is into stunt doubles these days.  For instance, this famous scene from Das Rheingold is done by two stunt doubles: 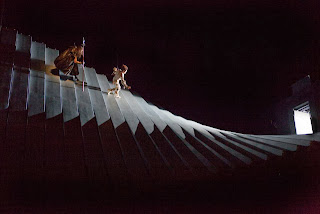 One of the biggest criticisms of this production of Tosca the first time around was the scene at the end where Tosca jumps.  It looked like they threw a large rag doll out the window.  It's a bit of a leap for a soprano, quite a bit higher than Senta's leap in Flying Dutchman in San Francisco.  So this time they used a stunt double.  She looked fabulous.  There was also a stunt double at the beginning to stand in for Angelotti when he climbs down the wall in the church.  This one was very smooth.

There is still a lot more to criticize here.  I defy you to find a church that drab anywhere in Rome.  Even the Protestant church is fancier than that.  But this is all old news.

I especially liked Roberto here.  He looks and sounds very good right now and was only occasionally off the pitch, never seriously.  Racette is always a good singer and a marvelous, multidimensional actress.   We enjoyed the enthusiasm when she stabbed Scarpia.  This is her year.

We were interested in Scarpia sung by George Gagnidze.  He had a translator in his interview, and we couldn't tell what language he was speaking.  He is from Georgia and received a rousing boo when he appeared for his bow.  This is supposed to be good, but I wasn't sure he understood that.  He made an excellent villain.

Perhaps one of the best-sung HD productions of all. Gagnidze (who was speaking Russian, BTW) offered just the right amount of menace without overplaying it. Alagna sounded the best he's been in years; as you said, surprisingly few intonation problems, except for very early in the opera. Racette was excellent: much better than Mattila in the earlier (2009?) HD.

I loved the peek we had at the Falstaff rehearsal!

It's raining Toscas. Saw the repeat of the ROH production from 2011 in cinema last Thursday and looking forward to Met HD encore tomorrow night. I own the ROH DVD but could not resist seeing JK (and Terfel) on the big screen -and it's a long stretch til the Werther HD in March.