I cry when the pressure becomes too great 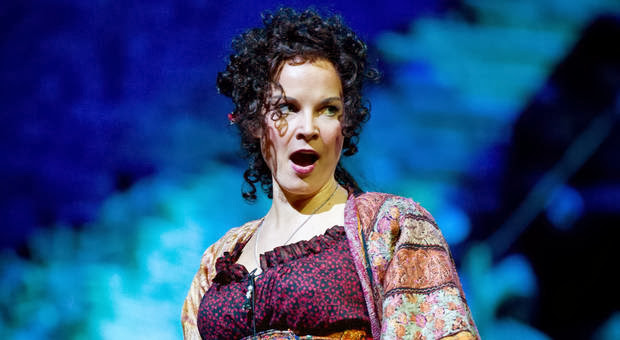 
"I cry when the pressure becomes too great," The opera star presents her autobiography "Really important are the shoes." In the interview she talks about the pressure to succeed, why she is shy and her farewell to trouser roles.

Elīna Garanča:  Honestly?  Because I was persuaded to.  I myself would not have had the idea for this book, because I myself found that I am too young. But I am currently at a turning point in my life. I am about to turn 40, in a few weeks I will have my second baby - with this my family plan is completed. And in the next few years I want to sing new, more dramatic roles. So I thought, why shouldn't I after 15 years on the stage write a kind of interim result to be read in 20 years, as I then thought about my life and the world of opera.

In your biography you speak very openly about your childhood, your fears and your private life. This one does not even know of an Elīna Garanča ...

It was not easy for me to unpack these thoughts and details about my life, because I'm actually a very reclusive and shy person. I have never told before how my husband and I got to know each other, and I never talked about my melancholy.

In what moments are you melancholy?

My fans see me rather more like a "Wikingerweib" [female viking?], which nothing can shake. In fact, I'm the opposite, I am very vulnerable and there are rarely nights where I can sleep through the night without chasing the thousands of thoughts running through my head. I often look enviously at my colleagues, who brimming with confidence and often without knowing all the notes, stand on the stage - that would be a disgrace for me. My self-doubts usually start ten days before the premiere.

Then I argue if I can sing the role, if I understand what the conductor wants from me. To escape this misery I have several methods - go to the gym or I regain my peace of mind with gardening.  If all else fails, then it only helps to cry against the pressure. I listen to the saddest arias, drink a glass of wine and let my tears flow, and afterward fall exhausted into bed. This cleansing process works. The next day I have found my good mood, and self- doubts are gone.

Is that the way you deal with the pressure to succeed?

Yes, of course. I try to protect myself from flops by choosing my parts very deliberately, often saying no to commitments when I'm not convinced. I prepare for every role very intensively. But nevertheless, the stage fright is getting bigger and the pressure grows. The older I get, the more my presence is ever more present. I become more and more aware that I need to protect my name. And I am on stage a completely different person than in private life. That's why it often bothers me how people think about me.

You want to make a repertoire change in the coming years. In which roles will one no longer see Elīna Garanča?  Will you continue to sing Carmen?

Carmen is a role that can safely accompany a mezzo-soprano for a lifetime. It only changes which Don José is by my side. But what I definitely feel too old for at 40 are the trouser roles. I miss this youthful naivety, which is needed for the role of Sesto or Octavian. In these Bubenpartien [kid parts?] you will certainly not see me again. Besides that, routine bores me, I want to break new ground. In the next few years I want to sing a Santuzza, an Eboli and the highlight of my career Amneris in Aida.

You will have your second baby in a few weeks. What do you sing at the moment?

When do you want to return from maternity leave?

I don't make any stress for myself. Fixed is the concert in Göttweig, but if I already appear before that will depend on my second daughter.   Even though I can imagine it going well, for the second child one has more routine.

How do you manage logistically - to bring two children, your career and the career of your husband under one hat?

This is actually a logistical feat. My husband and I try never to be longer than two weeks separated from the children. We have our own nanny in Spain and a travel nanny.  In the future we will be traveling with two nannies.  And as hard as it may seem for some, we will also sometimes separate the children.  Say, the baby accompanies me to a gig and my older daughter Katie accompanies my husband to a concert.

Your husband is a conductor. You are the superstar. How does he deal with playing second fiddle?

In trouser roles Elīna Garanča always excelled on the opera stage: 'But for these roles I now feel too old' My husband has never complained until now. He is not one who runs after the fame or the glory. Just like me, he is very down to earth and he got to know me when I was not long The Garanca. Sometimes he complains, because I've become very impatient in recent years. But we both try to realize our dreams. But between us there is no competition: Who got the better reviews, who received the greater applause. That would be the death of our relationship.

It is amazing that your mother when you were 17 dissuaded you from a career as a mezzo- soprano, because she saw too little talent. Has she already apologized for this miscarriage of justice?

When I think back to my voice then I have to agree with my mother afterwards. My voice had then perhaps timbre, but there was too little volume with only one octave and too little power - these were not prerequisites for an international career. There existed a nature of the voice, but which had to be polished properly.

They repeatedly emphasize that the Garanča of the stage has nothing to do with private Elina. What is the real Garanča ?

I am still the same natural person I was as a child. At the moment I'm winterizing my garden. Dirt is under my fingernails, I just put down rye seeds that I took from the earth in the spring. This is an ideal fertilizer for my vegetable garden. I can still milk cows or bake my own bread, which I learned from my grandmother. My friends always laugh when I describe myself as the best singing milkmaid.

Personal: Elīna Garanča World star without airs The native Latvian (37) wanted to be an actress. In the entrance examination for the Academy of Drama she fell through. When she expressed her desire to her mother, who was herself a mezzo-soprano, to become a singer, the mother said : "Nothing will come of your voice." But Garanča did not give up.  Her first engagement was Garanča in Thuringia. From then on it was uphill. Ioan Holender gave Garanča a fixed contract at the Vienna Opera. Since 2005 she is a freelance artist and has sung on all the major opera stages of the world from the Met in New York to Vienna to Covent Garden. She are currently considered the best "Carmen" in the world. In addition to the biography, a new CD "The best of Elīna Garanča" has been released. ( Kurier ) Created on 10.11.2013 , 11:21

'Really important are the shoes' : In this biography Elīna Garanča gives insight into her career, her personal life and her self-doubt. Released in Ecowin-Verlag at 21.90 Euros.

[It is none of my business to second-guess the lady, but I disagree.  There is a world of difference between a Mozart trouser role and a Strauss trouser role.  You can feign youthfulness, but it is not possible to feign the mature voice required for Strauss.  I have no argument for her being bored with them.]
Posted by Dr.B at 4:36 PM

Thanks for translating and sharing this!!